Journalism in the Digital Age I
This is the Film and TV awards season with the red carpet being used to sell dresses and shoes at the Baftas, the Grammys and the Oscars are just around the corner. The music business also likes to get involved in some mutual back slapping and this week saw the Brit Awards get in on the act. Just before the awards night, a journalist decided to tweet about the invitation he had received to attend the event. This was picked up in the Press Gazette. 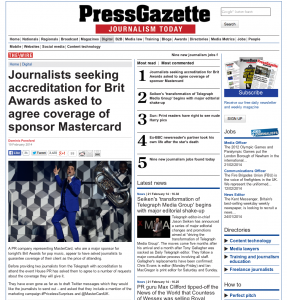 The invitation showed that there was a clear expectation that attending journalists would get involved in some promotion on behalf of the sponsors. This shouldn’t be a surprise to anyone studying the media as entertainment news is never ‘news’ and is always promotion in some way. It’s difficult to differentiate between the promotion of record company products (by reporting on The Arctic Monkeys winning the ‘Mastercard British album of the year’ award for example) and the promotion of the credit card paying for the journalists’ and musicians’ night out. Entertainment journalists are usually bought and paid for in some way so this protest was, to coin a phrase, #priceless.

Journalism in the Digital Age II
With job cuts and an increasing number of pages to fill, modern journalism is often (and often quite rightly) criticised for its inaccuracies, its reliance on speculation, its lack of fact-checking, its replication of PR driven copy and its simplistic approaches. Ticking many of these boxes is TMZ who either misunderstood or misrepresented (or both) what Jonathan Davis of Korn had to say about the message behind his new video for the song Spike in my Veins. 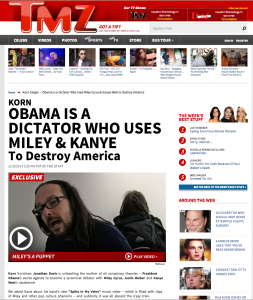 It’s difficult to know how to read this type of journalism. The video on the website shows Davis offering an argument regarding the modern media’s role in providing ‘bread and circuses’ – devices intended to distract the population from more important matters. Hardly a new or original idea. Logically TMZ’s decision to misrepresent this idea must be down to one of the following:

Who knows where the truth lies but providing a video with the misrepresentation at least allowed the audience to hear what was actually said and hopefully some will have realised that there is a more complex point being made than reported. Davis went on to repeat some of the points made in the TMZ video and this was added to the story by other news outlets such as the NME and The Independent. However, they simply reported the TMZ take on the story with the picture editor of the The Independent seemingly doing an impression of a Mail Online editor when selecting the illustration.

Why bother investigating nuance when you can create click-bait with copy and paste? 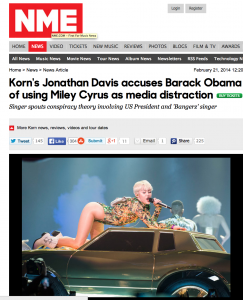 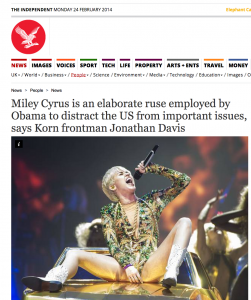