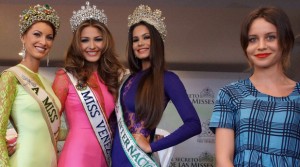 I am not in the TV station’s target audience and I can’t know if BBC3’s habit of giving ‘investigative journalism’ duties to young people increases the possibility that the target group will identify with the presenter or if the demographic (identified as being between 16 and 34) feel patronised when serious issues are dumbed down. By presenting complex stories in a highly simplistic way using a ‘too cool for school’ and often simpering style, I can’t help but feel the BBC are doing their audience a disservice. I’m sure many of the young people targeted by BBC 3 saw through the sycophancy and ignorance in Billie JD Porter’s documentary about Venezuelan beauty pageant culture, Secrets of South America: Extreme Beauty Queens. (BBC3 (5/02/14).

A fascinating and at times disturbing story was told that shows how a beauty pageant (Miss Venezuela) has now developed into a reality show where a 67 year old ex-ad executive and clothes designer mentors competitors who are competing for an opportunity to take part in the national beauty contest. They parade in front of a panel of judges led by Osmel Sousa who has worked for the pageant since the 1970s and has been the president of the Miss Venezuela Organisation for 33 years. The fact that Venezuela has won more international beauty contests than any other country means Sousa’s word has become ‘law’. The show depicts dozens of beautiful young women who are subject to the judges’ critical gaze where every part of their body is analysed and critiqued. Sousa instructs the women as to what they need to do to achieve the requisite perfection. These improvements include teeth filing, losing weight and all manner of plastic surgery procedures including breast enhancements and facial surgery. The women are also coached to walk the catwalk, pose for photographs and to ensure they avoid voicing anything other than approved opinions or ‘neutral’ thoughts.

The documentary focused on one contestant, Meyer, specifically because she came from an impoverished background and lived in one of Caracas’s most deprived and violent slum areas (Barrios). Despite the extreme nature of her family’s poverty and the personal tragedies they have had to endure (her brother was murdered), the family had spent an estimated £7000 on plastic surgery for Meyer in the hope that this would improve her chance of winning the pageant. One procedure, a slimming aid, involved sewing a patch on to her tongue so that eating solid food is too painful and this forces Meyer to adopt a liquid only diet. Disturbingly the stitches holding the patch on her tongue looked rough and not at all like the stitches you’d expect a professional surgeon to do. 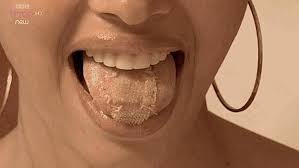 As she slowly ate soup and the discussion focused on the fact that she couldn’t kiss, I couldn’t help but wonder what might happen should Meyer’s tongue become infected. All this was incredibly disturbing in itself but the presenter appeared to have no deeper engagement on the issue beyond a voyeuristic fascination with the plastic surgery procedure.

Similarly, Porter’s engagement with the pageant itself showed her being comfortable with the parading of bodies and the desire for success and fame. In her first encounter with Sousa, Porter fudged it at first by being ‘star struck’ – despite the fact that she had not encountered his ‘stardom’ before. Being told he was famous and influential was enough to make her red faced and tongue-tied apparently. She arranged to interview the impresario more formally and allowed herself to be made ‘Osmel ready’ beforehand – to have her face painted and her hair curled so she would be acceptable in the eyes of Sousa. She, like the women in the pageant, was desperate to receive Sousa’s approval and so her interview did nothing more than reinforce his world view. She sat whilst he critiqued her look (she needs her teeth fixed, her moles removed and should be blonde according to Sousa) and she seemed to think she found the ‘secret of his success’ when he declared he’d been surrounded by ugly women growing up. ‘So that was it. You were angry’ she declared somewhat sympathetically. Porter mentioned some of the feminist protests against beauty pageants and Sousa dismissed ‘feminists’ as ‘Ugly Betties’ causing the most incongruous statement of the programme when Porter declared herself to be one (a feminist, not an Ugly Betty). 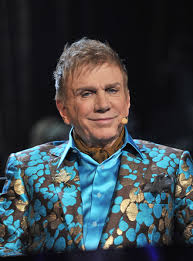 This did cause Sousa to raise an eyebrow (metaphorically of course- see above) as he didn’t think she looked like one. Porter did voice the concern that maybe women ‘shouldn’t have to be beautiful to be respected’ but only at the end of the programme did she raise the question (by quoting Spiderman though sadly) about the undue influence Sousa has. He brushed the question off saying he doesn’t think about it and we were left with an image of Sousa ‘improving’ Porter and her accepting this with a smile and a kiss. At no point did she challenge the morality of encouraging young women to spend money they can ill afford on surgery they don’t need – all based on the incredibly narrow version of beauty (the successful women contestants look frighteningly similar) constructed by an elderly man. Not once did she consider that the one person who is guaranteed financial success in all this is of course, Sousa. 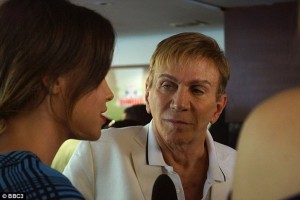 Given her history as a trust-fund party girl, a commentator for Vice magazine, a hipster model and a presenter on C4’s programme, The Joy of Teen Sex, she was clearly in her comfort zone when focusing on the pageant. There were, however, some very odd moments in the documentary when she gave an indication of her lack of geo-political knowledge. In her introduction she described the recently (at the time of filming) deceased Hugo Chavez as a ‘self-styled Robin Hood who took from the rich and gave to the poor, calling it a socialist revolution’. I would have been interested to know what she would have called it… but she left it at implied criticism before concentrating on looking at the women desperate to be selected in the competition. Later she voiced further arguments that were specifically critical of the Venezuelan government in passing – providing a casual, naturalised point of view that simplified the economic and political position of Venezuela down to pro-capitalist farmers criticising government agricultural policies, and pro and anti-government arguments around distribution of products in shops.

Concerned about the violent culture in the barrios Porter visited a hospital to look at the wounds of young people caught up in street violence where poverty is raised as its main cause but when speaking to the ‘family liaison’ police officers involved in a scheme to try to reduce violence in the slums, she reduces the discussion to how much people love the pageant. She mentioned the poverty she has witnessed and the oil wealth of the nation but managed to completely de-politicise the beauty contest itself (aside from when she makes the leap from comments that its huge success means less people are on the streets when it’s being broadcast to the pageant’s role in ‘fighting crime’). ‘Money, fame and a chance to travel the world’ are on offer to the successful contestants but the pageant’s impact on young women and the poor families they come from is ignored other than in the most simplistic ways. There was even a claim that ‘all the women’ involved in the pageant have successful careers – the documentary itself shows this is not true but does not consider the long-term impact of failing to make it through to the finals or win the competition.

Porter seemed to find it ‘cute’ when talking to pre-teens attending a Saturday class in order to learn how to do their make up and walk ‘correctly’. These young girls are already inculcated into perceiving that their value comes from how well they confirm to these ideas of beauty but Porter simply joined them on the catwalk. When watching a model collapse on TV because of the severity of her diet, Porter could do nothing but express admiration for Sousa, the pageant and the joys of trash TV. Porter is involved in nothing than the worst point and look ‘journalism’. She explains her position here but fundamentally what came across in this documentary was her own values about fashion, beauty, fame and (whether she knew it or not) consumerism and capitalist values.

Bring back Stacey Dooley please. At least she has some emotional depth and empathy with the subjects of her documentaries. When faced with a crying pageant-hopeful Porter’s observation that Sousa may be making some people ‘sad’ felt shallow, forced and lacked any sense of real human engagement. It may not have helped that she was clearly reading her questions and was shown being placed in specific situations but Porter’s documentary told us more about her than her subjects and she proved not to have anything of interest to say.

A Critique of Sousa in the New York Times