Sandwiched between a breathless report on the unions and the Labour party and a smirking commentary on everyday sexism, Newsnight hosted a slightly meta discussion on the news this week. Launching a new book, News: A User’s Manual, the author Alain de Botton discussed his observations with former New Labour spin doctor Alistair Campbell, BBC journalist Samira Ahmed and the show’s host Jeremy Paxman. His argument about news sounds interesting, if not necessarily wholly original. Probably nothing to do with the author, but it’s a shame someone thought it was a good idea to present a summary of de Botton’s thesis in the style of an Adam Curtis documentary! Sadly, the Newsnight video didn’t do much to enhance de Botton’s position – but it did act to remind that Curtis does montage, tongue-in-cheek humour and serious cultural analysis brilliantly.

Compare for yourself. The Adam Curtis film was first broadcast during Charlie Brooker’s Newswipe in 2009 (which in itself is worth a watch).

I have been teaching Media Studies so long I have almost become immune to the regular mocking and dismissing of the subject I teach at the hands of the news media. Media Studies is used as ‘proof positive’ when evidence is needed that education is in a state of decline or is said to be responsible for young people turning their back on ‘proper’ subjects – potentially creating a society bereft of engineers and physicists as young people are lured towards it as an ‘easy option’! I’ve grown a thick skin over the years but do regularly get annoyed at how casually the hard work and skills of my students can be dismissed by people who have no idea what the subject demands of them… but Newsnight this week did something new this week. Instead of mocking Media Studies, it just pretended it didn’t exist.

I completely agree with de Botton’s argument that the News and more generally the media is a massively influential part of contemporary culture. Being able to read the media – to recognise the way news is shaped and produced as a product and how that shaping sets the agenda for debate, reinforces values and both selects and rejects content to meet its own institutional agenda, should be seen as an essential skill and, yes, should be taught in schools. But this is, of course, what Media Studies has been doing for years at GCSE, A Level and degree level. To hear Alistair Campbell say that there is now a ‘need for an education about the modern media’ was heartening. (It would be great if he would be prepared to champion the subject.) De Botton however, claims that this is not going on – he seems totally unaware of the subject. Media Studies won’t be on the curriculum in Harrow and Eton of course, but in classrooms up and down the country thousands of young people are becoming more media literate – despite Media Studies often being an underfunded and under-regarded subject.

To be fair Media Studies can sometimes be its own worst enemy. It asks a lot of its students, Success in the A Level requires academic analysis skills, conceptual/theoretical understanding, fluent written communication, technical skills and creativity. The marking criteria for the A Level includes ‘independence’ (the ‘critical detachment’ that Ahmed says is an important when accessing the media) and so A Level Media Students have to do more than memorise, they have to understand a range of concepts, theories and contextual issues. In addition, they have to demonstrate a broad media knowledge. I’ve seen brilliantly academic students lose valuable marks because they have poor practical/creative skills and wonderfully creative students missing out on high grades because they are not good at writing essays. Getting a high grade in the subject is no mean feat – it indicates that the student is an excellent all-rounder. Media Studies as a subject also struggles because specifications and assessments cannot always keep up with the speed of technological and institutional change and recent changes have made traditional approaches to the subject feel less relevant. Even the way we define ‘media’ has been in a state of flux for over a decade. The right questions are being raised and Jeremy Paxman and Samira Ahmed’s defensive responses helped support de Botton’s arguments but this also indicates why Media Studies will never get good press. A culture capable of critical analysis of the media isn’t exactly what ‘the media’ wants or needs.

One media personality who is prepared to defend the subject is David Aaronovitch who is interviewed in this free sample of Media Magazine – details of how to download can be found here. 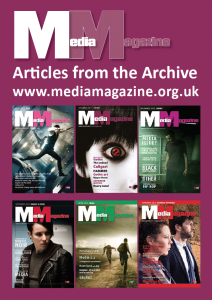 My own article in the edition this interview comes from (issue 44) considers the future of the subject in an ever changing media landscape. 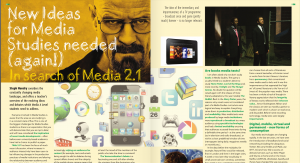