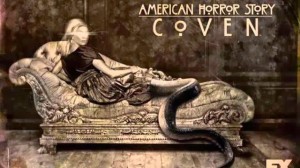 American Horror Story begins season 3′s penultimate episode with a silent movie style presentation of the history of the Test of the Seven Wonders. To identify the leader of the coven witches must demonstrate their ability in seven magical skills. 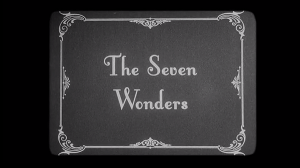 The test has been alluded to several times but the wonders are formally identified here as:

The test itself is dangerous for the participants and Fiona is trying to persuade Queenie to undertake it to enable her to take her place as the Supreme. The girl isn’t fooled by Fiona and she believes Fiona is working her own angle. Queenie (unlike Fiona) is concerned as to Marie’s whereabouts. Fiona dismisses her concerns and, annoyed at Queenie’s disrespectful tone, she magically chokes her and demands the respect due to her as the Supreme and insists that Queenie will perform the Seven Wonders on Saturday morning ‘or … will die trying’.

To Hell and Back

Queenie has found a pool of blood in the greenhouse and she senses it is Marie’s. She casts a spell that allows her to descend to Hell so she can speak to Papa Legba to find out where Marie is. Queenie finds herself in her own personal hell – the fried chicken shop she used to work in. At the head of the queue is Papa Legba. He warns Queenie to return back as she could end up trapped in hell if she lingers. 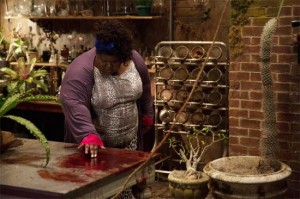 Back in the school Papa Legba visits her showing her that Delphine has dismembered Marie and scattered her remains across New Orleans. Queenie notes that given the state Marie is in, she is in no position to perform her annual service for Legba and so is in breach of contract. Given that Delphine cannot be killed whilst Marie remains immortal this seems to imply that Marie’s spell is now broken and Delphine is no longer immortal. 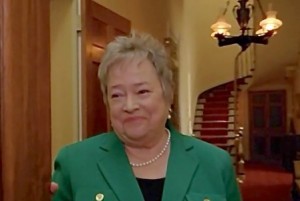 Queenie finds Delphine who now has a modern make-over and is rewriting history by leading the tours through the La Laurie mansion. This gives her the opportunity to retell the history of the house in her favour claiming the idea of La Laurie being a torturer and mass murderer were ‘lies invented by her many enemies’. In flashback we see that Delphine attended a tour and was horrified at the way her story was being told. She tricks the tour guide into letting her back to the attic alone and, whilst there, she attacks the guide and imprisons her in one of her torture cages.

Queenie tries to persuade Delphine to use her second chance at life to do good and redeem herself. Delphine scoffs as she has learned that modern redemption comes from making public apologies and she has seen the hypocrisy of the modern world and refuses to join in. Delphine’s racism and psychopathic violence is never far from the surface but she has certainly got the measure of modern politics, celebrity culture and the 24hr news cycle. Annoyed at Delphine’s refusal to make amends and even see why she should, Queenie realises there is no redemption for Delphine so she stabs her, telling the woman she is sending her straight to hell.

In hell we see that Delphine and Marie are bound together in the La Laurie attic doomed to live out their hate and violence filled relationship for eternity. Delphine and her daughters are imprisoned in the attic and Marie is doomed to torture them because, as Papa Legba says, ‘everybody pays, everybody suffers’.

Cordelia goes to Madison for help as she has been trying to locate Misty but fears blinding herself may not have worked in allowing her to regain the second sight after all. Madison doesn’t want to be touched by Cordelia (fearing that Cordelia will discover she buried Misty alive) so she transmutes to avoid Cordelia’s touch. Cordelia is unimpressed by Madison’s growing powers saying all witches powers spike at a time of crisis. Madison appears to magically protect herself from Cordelia’s touch and so Cordelia sees nothing – reinforcing her belief that the second sight has not returned.

Cordelia confronts Fiona about Queenie being told she has to undertake the Seven Wonders but Fiona is struck by Cordelia’s self mutilation. She tells Cordelia that her daughter’s power is not a gift from her but is something that is inside Cordelia herself. Fiona offers Cordelia her own mother’s necklace and when putting it on her daughter, Cordelia receives a vision of all the witches dead. She sees Fiona walking through the school that is littered with bodies. Cordelia sees her own body with a bullet thorough her forehead and looks down as Fiona takes back the necklace. The sight is back.

Knowing Fiona plans to kill them all, Cordelia visits the Axeman and shows him that Fiona can’t be trusted. Fiona has booked her plane to escape New Orleans and, only having one ticket, clearly intends to leave the Axeman behind after she has killed the witches and regained her strength.

Back at the school, Cordelia now seems to be getting a sense of Misty being trapped and she finally receives a vision identifying where Misty is buried. She takes Queenie who, after being reminded about her powers, pushes her way into the crypt and they find Misty, apparently dead in the tomb. Queenie uses yet another power and breaths life back into Misty. 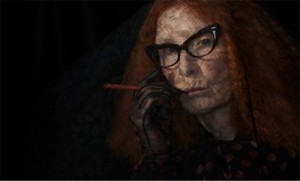 Myrtle tells Madison that Cordelia and Queenie have gone to find Misty just as Zoe and Kyle return to the coven. The pair had gone to Florida but after Kyle showed that he is unable to control his violent impulses by killing a tramp, Zoe bought the man back to life and decided she needed to return to the coven believing herself to be the next Supreme. As she tells her story, Cordelia and Queenie return with Misty who is livid with Madison. Misty attacks the girl and Madison takes a beating until the Axeman breaks into the house threatening to kill them all. He is covered in blood but Cordelia identifies it as belonging to her mother, not the Axeman.

Another flashback shows that Fiona had gone to the Axeman’s rooms but he’d taken Cordelia’s warning about Fiona to heart and was angry that Fiona had planned to leave him. When Fiona realises there’s no point trying to hide the truth, she admits that she has enjoyed her time with him calling him a ‘delightful distraction’ but she wants have a better life than he could offer her once the potential Supremes are dead. She admits that she could not love him and crazed with a broken heart, the Axeman buries his axe in her back and hacks at her until she is dead. Back in the coven, Cordelia can see that he has disposed of the body by feeding her to alligators.

The witches debate if he should be killed. Myrtle speaks up for him as he saved the coven by dispensing with Fiona but Kyle goes to kill him before Madison and then the other witches finish the job – mirroring his first bloody death at the hands of the coven seen in episode 6. For the first time the witches work together and combine their powers to protect the coven. As Misty says, they really don’t need a man to protect them. 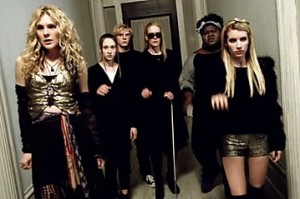 The witches gather to look at Marie’s portrait and Cordelia announces that a new Supreme needs to be identified immediately. As Fiona had not named her successor, all the witches would need to undertake the test of Seven Wonders so that a new Supreme can take her rightful position as the leader of the coven. Cordelia tells all the witches they will undertake the test on Sunday at dawn. It might be worth noting this is exactly what Fiona had wanted – just a day later than originally planned.

Whilst having her portrait painted, Fiona has a nosebleed – bought on by her illness. Just beforehand, Myrtle had bought a vase of flowers into the room and placed them behind Fiona to help ‘balance the frame’. 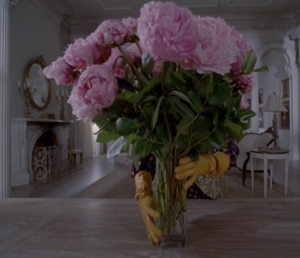 Later Myrtle warns Madison not to sniff the deadly nightshade she is arranging in yet another vase. The plant is poisonous and sniffing it can cause ‘delirium’. Of course, this issue with Myrtle and the flowers could be nothing but, what if Fiona’s illness was being made worse by some subtle plant based witchcraft? The close up on the first vase of flowers certainly seems to imply they have some significance. 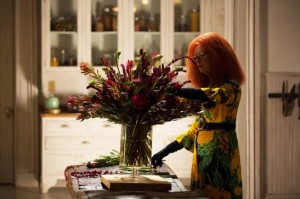 Who’s the next Supreme?

As we wait for the final episode, Delphine, Nan and Marie are in hell and Fiona has been fed to the ‘gators. Whether these deaths are final is still to be seen but the next Supreme seems likely to be either Zoe, Misty, Madison or Queenie. It’s never safe to assume anything so Cordelia may well be in the running and, although she’s older and clearly a touch crazy, Myrtle is still alive and kicking so may finally lead the coven she loves. And, as we’ve heard all season, there are other witches out there so maybe Stevie Nicks could have an outside chance and, this being American Horror Story, it’s not beyond the realms of possibility that the new Supreme could be someone from outside the coven. All of the main contenders have shown a number of powers – but Cordelia says this could just be in response to the dangerous situation the coven finds itself in. Just this week, Madison can add transmutation to her list of powers and both Queenie and Zoe bought people back to life. Queenie also descends into hell (and safely returns). Even though all the eviddence so far points to Fiona being dead, leaving the way clear for her replacement, it is not beyond the realms of possibility that Fiona has fooled the Axeman or the witches (or all of them) to believe she’s gone simply to ensure the test goes ahead. One more week to go…

Misty (after learning Fiona’s body has been disposed of in the swamps): ‘Well that’s it then. Even I can’t bring someone back once they are gator-shit.’