The opening of episode 11 gives us some insight into the start of Delphine’s blood lust. It is 1830 and, wearing the most amazing puff sleeves, Delphine is annoyed to find herself back in New Orleans. Having experienced the sophistication and glamour of Paris she sees New Orleans as a backwater and she fears her life in America is doomed to be both harsh and boring. She has to kill a chicken for the family to eat but finds the warmth of its blood appealing. She then takes advantage of a wounded slave and uses his body to satisfy her gruesome and murderous curiosity. 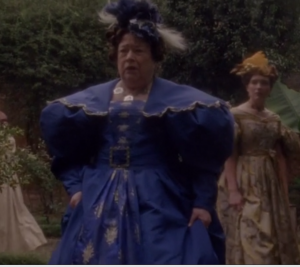 Back in the modern day, the coven are at the cemetery attending Nan’s funeral. Cordelia feels responsible for not preventing Nan’s death but Marie and Fiona show no remorse. They are all surprised when Queenie turns up as it has been assumed that she died in the shooting at the salon. Not only has she survived, but she has also managed to reaffix Delphine’s head (without visible scaring). It appears that her powers are growing and so Queenie is back in the running to be the next Supreme. She is, however, livid with Marie for leaving her for dead but she and Delphine (who she has on a collar and chain) join the others again and they go back with the other witches to the school.

Delphine’s voiceover provides us with an insight into her thought process (as well as implying the passing of time), both as the murderous 19th Century slave mistress and as the women in forced servitude to the coven. She is shown being humiliated and threatened by Fiona and Marie and is clearly alienated form the modern world she finds herself in. She is troubled by the three-way sleeping habits of Zoe, Madison and Kyle; she watches Cordelia obsessing over trying to regain the sight; she worries about Fiona’s nocturnal trips out ‘without her undergarments’ (we later learn Fiona’s noir-tinged affair with the Axeman is still on).

Our sympathies are stretched however when we hear Delphine found pleasure in mutilating animals and then moved on to humans. However appalling Delphine undoubtably is, there is a perverse pleasure in the fact that she may be getting her own back in a small way by serving the witches ‘dirty’ food. Interestingly Myrtle seems to be the only person who appreciates the work Delphine is doing – she is particularly enthusiastic about Delphine’s cooking. The injury of a garden worker gives Delphine an opportunity to go back to what she enjoys most and she captures the man and takes him to the doll-filled attic. Here she indulges her desires and she ‘experiments’ on the hapless Gardner and ends up eviscerating him. It is at this point that she realises that she is not alone and Spalding is in the attic with her. He tells her he is the spirit of the murdered butler and manages to persuade Delphine that he can help her kill Marie if she does a small (but costly) favour for him. She buys him an ‘authentic 1890’ china doll and he returns the favour by giving Delphine a potion to that will undo the magic making Marie immortal – he gives her Benadryl! 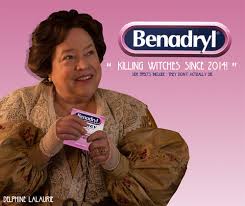 Zoe uses a spell to discover that Fiona and Marie murdered Nan and the gulf between her and Madison grows larger as Madison is disinterested in what happened and when Kyle rejects Madison’s sexual advances, Madison attacks Zoe launching a lamp at her head. The violence is ended by Myrtle but Madison, confident that she is to be the next Supreme, dismisses the idea of Myrtle’s authority and vows to change things when she takes over. As she leaves she threatens Kyle saying, ‘putting you together was fun but taking you a part is going to be even more fun’. Later Myrtle summons Zoe to give her a Rosenthal piece of jewellery that she is to sell as Myrtle insists that Zoe and Kyle escape the coven giving them a pair of tickets to Epcot. 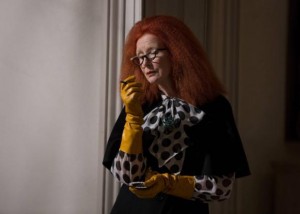 Cordelia tries to make peace with Queenie but her apology is rejected. Queenie accuses Cordelia of putting the coven in danger and reminds her that it was her husband who shot Queenie in the stomach. This clearly pushes Cordelia into a dramatic decision. She has realised that if he is able to see, she cannot have ‘the sight’ so she blinds herself with a pair of secateurs. Fiona rushes in and Myrtle tells Fiona that Cordelia has regained the second sight and so Fiona will risk being ‘read’ if she goes to her daughter. Fiona decides to wait and says she’ll be back once she’s had a drink!

Hank’s part in the salon shooting is covered up by the Adelphi Trust who are struggling under the pressure of the SEC investigation. Renard recognises the need to attempt to get the witches on-side but intends to kill them once the Trust has a chance to recover. His plan, however, comes to nothing as he underestimates Fiona and Marie as the Axeman infiltrates the meeting set up between the witches and the witch-hunters by posing as a waiter. He brings the meeting to a bloody end after Fiona rejects Renard’s offer of a century of peace with the gleeful slaying of the representatives of the trust. He does most damage with his axe but is not so inflexible that he is unable to use his enemy’s gun even when it is still in his dismembered hand. The axeman gives Fiona the pleasure of dispensing with Renard herself and, with that, it seems that the threat from the witch-hunters has been removed. 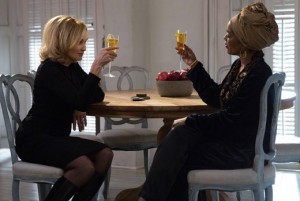 After having a drink together to celebrate, Fiona leaves Marie at the school as she goes to reward the axeman for his services. Marie has been drinking and Delphine believes that she has been mortally weakened by the capsules provided by Spalding. Delphine stabs Marie through the heart. Marie is upset but nowhere close to dying of course. She chases Delphine but, at the top of the stairs, Spalding hits Marie on the head with his china doll and she tumbles unconscious to the bottom of the stairs. Delphine realises she’s been duped and Spalding suggests Delphine gets rid of Marie by burying her and ensuring that she wouldn’t be able to dig her way out. Spalding said he wanted Marie out of the way and it appears that protecting Fiona and the coven may not have been his main motivation. He takes the baby Marie stole for Papa Legba to the attic. In perhaps the most disturbing scene of the series so far, dressed in his nightgown and bonnet once again, Spalding takes a creepy pleasure in having a ‘living doll’ of his own. 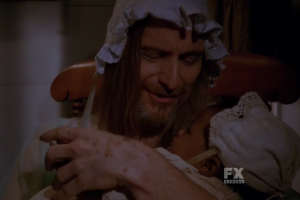 Taking Myrtle’s advice, Zoe persuades Kyle to leave the coven with her even though he worries that he will be danger to Zoe given his propensity for violent outbursts. They make their way to the bus station and, whether it is the upbeat music, the beaming smiles on the faces of love’s young dreamers or the fact that the last time Kyle was on a bus things didn’t go well for him, something in the final shots of the episode seem to indicate that this story may not get a happy ending.

Threats to the Coven

Throughout the series the nature of the threat to the coven has changed – from Marie, Hank, the Axeman (briefly) and the Adelphi Trust – all these external threats have either been eliminated or assimilated into the Coven. With the swift dispatch of the Trust this week it is clear that these external threats have been distractions, MacGuffins even.

Myrtle identifies the location of the real threat to the Coven and it’s been present since the first episode. There are ‘no enemies from the outside perhaps, but danger lurks within’. The biggest threats lie within the Coven itself. Fiona’s desperate attempts to avoid death have led to her murdering her own (Madison and Nan) and she has vowed to ‘kill them all’. Madison’s belief that she is the new Supreme means that she threatens the safety of other witches she perceives as a threat and Queenie harbours huge resentment for the Coven and foe Marie. Even Kyle recognises he’s a loose cannon as he has little control over his violent urges and, although she’s more in control of her emotions, Delphine is a psychopath with a grudge. Even Zoe has shown she can kill when it is necessary although, like Cordelia, she tends to act to protect the Coven. Finally, as death is never the end, being bashed unconscious won’t be either. Both Marie and Misty are likely to be back and neither is likely to be very happy! With two episodes left it is anyone’s guess which of these threats will rise and be at the heart of the final battle. Even after this episode’s high death count and the fact it was awash with blood, no doubt a fair bit of blood is yet to be spilt.

Pilgrim, pillbox, beanie, turban, trilby and cloche. When out and about the residents of Miss Robichaux’s Academy know how to wear all manner of hats!

Nan’s funeral gave us the best collection of hats so far this season. 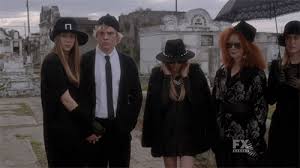 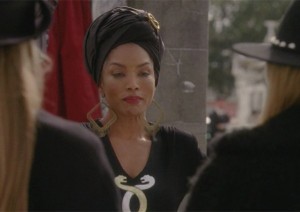 Here is some great hat wearing from an earlier episode. 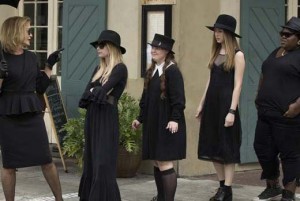 Ryan Murphy hinted that clues to the location of AHS: Series 4 would be offered in this and the following episodes. He has let on that it will be set in 1950 and Jessica Lange is practicing a German accent.

Several late 20th Century references were made within the episode – here’s a list of some of the theories.

My own feeling at the moment is that there may be something in the fact that Renard says ‘sometimes I feel like I’m trying to rid the State Department of Communists’ during his meeting with the witches. Perhaps a Cold War setting is on the cards for series 4? It’s certainly a period that can offers all sorts of American Horrors!

Some fans have come up with their own ideas – like this creepy ‘trailer’ for AHS: Circus.

Myrtle (extolling to joy of figs): Ah figs! Mother nature’s brown diamonds. In the fall the rotting leaves smell like an Olympians ejaculate.

There aren’t many other TV programmes that offer lines of dialogue like that!