Using the logic that, if you say it often enough people will believe you, The Daily Mail implies that the 3rd episode of the 3rd series BBC’s Sherlock indicates the left wing bias of the BBC. Following a brief shot in episode 2 of the front page of The Guardian with a headline about a London Mayor described as ‘dithering and self interested’, the final episode of series 3 focused on a capitalist media baron who had politicians (and others) in his pocket given the power of the information he had access to. 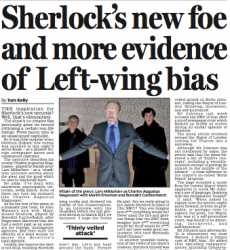 I’m not wholly sure what The Mail’s beef is: are they accusing Moffat (and the BBC) of inventing a fictional world of dithering London mayors and politically influential press barons that could never exist in the real world or are they annoyed that this fiction tapped into some real world truths that The Daily Mail would rather remained undiscussed? They don’t seem too bothered by the political stance of Today and other BBC news – unless they dare to offer the occasional alternative viewpoint once in a while. It does make you wonder what they are so afraid of.