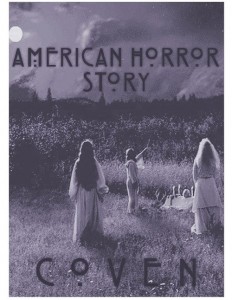 This episode begins almost immediately after the last one finished. Marie has lost her home and her community after Hank’s attack on the salon and she seeks refuge in the school with the witches. In a beautifully framed shot with Fiona shown in the mirror on the wall behind Marie, we a placed right back into the action with both Fiona and Marie back-tracking and burying past animosities to make a new, if slightly fragile truce. (Although how much er can trust the two women’s assertions of friendship is yet to be seen.) That night Marie is visited by the magical Papa Legba and we learn that her immortality has come from a bargain made with the voodoo spirit which means she has to pay a price for this ‘gift’. Marie steals a baby from the maternity ward so that she can present the voodoo king with an innocent soul and she uses a high pitched voodoo scream to glamour the security guards into killing themselves and allowing her to escape. 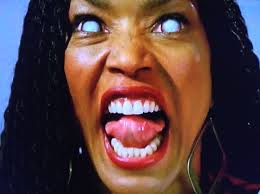 Marie tells the witches that she had paid Hank to kill the witches and Fiona realises that he was not acting independently but was part of a group of witch hunters. Fiona blames Delia for bringing him into the coven and putting them all in danger and even Marie is shocked by Fiona’s anger and the fact that she strikes her daughter hard enough to knock her off her chair. Fiona declares her desire to attack the hive and destroy the threat to the witches. Delia makes the link between Hank and the Delphi Trust identifying that the Trust’s CEO was Harrison Renard, Hank’s father. It appears that the Trust’s history can be traced back to Salem at the time of the trials. Fiona and Marie cast a spell to attack the Trust by destroying its financial strength. The company is raided and investigated. After casting the spell, Fiona collapses and is revived by Marie. Fiona asks her for the gift of immortality and, whilst she cannot give it without condemning Fiona to an eternity of cancer, she tells Fiona that she sold her soul to Papa Legba for an annual gift which included giving up the soul of her own baby.

In an attempt to tempt Misty into taking the tests to see if she is the Supreme, Fiona tells her about the power and influence the role would give her and introduces her to the white witch, Stevie Nicks  – played by Stevie Nicks. Meeting her idol is too much for Misty and her first response is to faint! The younger witches return back to the school to find Stevie playing Rhiannon for a smitten Misty and a blissed out Fiona. 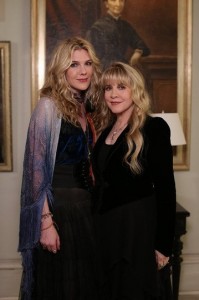 Madison is jealous that the focus is now on Misty and she can barely hide her annoyance as Stevie gives Misty one of her trademark shawls. Madison and Nan clash as Nan once again gets annoyed because no one seems to think she could possibly be a candidate for the Supreme. Nan demonstrates how her powers are developing but Madison reveals that since she was bought back from the dead her heart murmur has been cured and so she is back in the running for the role. Madison claims that being the Supreme is her destiny and that she intends to challenge Misty for the role.

Nan and Zoe go to visit Luke in the hospital and on the way we learn that neither Nan nor Zoe want Madison as the Supreme and Zoe believes Nan would be a better Supreme given Zoe believes Nan doesn’t have a ‘mean bone in her body’. When they arrive at the hospital Nan senses something is wrong with Luke as she cannot hear him anymore. The two witches visit Luke’s mother as Nan wants to see his body and they plan to ask Misty to reanimate him. She is furious to learn that he has been cremated as there is no way he can now be bought back. Nan also knows he was killed by his mother and in a fit of rage she forces his mother to drink bleach mirroring the cleansing forced on Luke in episode 8.

Meanwhile, Madison and Misty have joined a funeral parade (apparently for the barbecue) and Madison tries to make Misty doubt Fiona and Stevie’s motives by showing how their kindness is only intended to put Misty in their debt. Madison demonstrates her power by bringing the dead man to life and she claims this proves her own motives are purer than those who may need something from her. As Misty considers what Madison has said, Madison knocks Misty out with brick and watches her body sealed in a crypt. 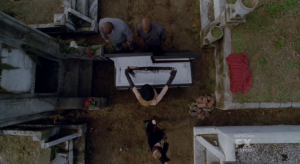 Fiona’s second spell of the night seems to be going well as she manages to summon Papa Legba and he agrees to a deal giving Fiona an immortality that would allow her to avoid ageing and illness. Fiona promises to sacrifice a loved one in return but when it comes to finalising the deal she is disappointed. Papa Legba discovers that she has no soul. She is visited by the Axeman and swears to kill all the young witches to ensure she removes any possible threat of a replacement Supreme draining her of any more of her power.

Nan discovers the baby that Marie has stolen from the hospital (hidden in a wardrobe). When challenged by Marie, Nan declares herself to be the next supreme and she threatens to kill the Voodoo Queen. Fiona arrives and sends Nan away but seeing how attached Marie is to the baby she suggests that another innocent soul could be offered to Papa Legba to save the baby. Marie and Fiona work together to drown Nan in the bath. Papa Legba accepts the offering and takes Nan’s soul to ‘the other side’ but not before observing that ‘you two together, big trouble’. 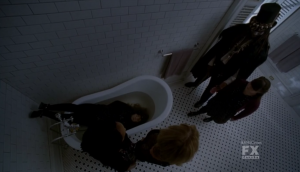 It’s been a busy day for the coven with Nan and Luke’s mother dead, Misty buried and Fiona having to accept her own mortality. The episode ends with a ballad from Stevie providing the soundtrack to Fiona’s self-piteous grief.

After playing two tightly wound, uniformed characters in two excellent US dramas Fringe and The Wire it was great to see Lance Reddick as a coke-snorting, top-hat wearing, soul purchasing, debauched spirit. 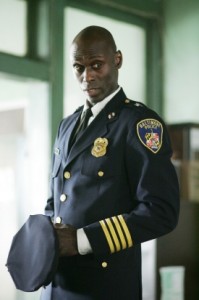 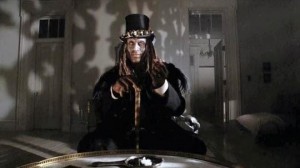