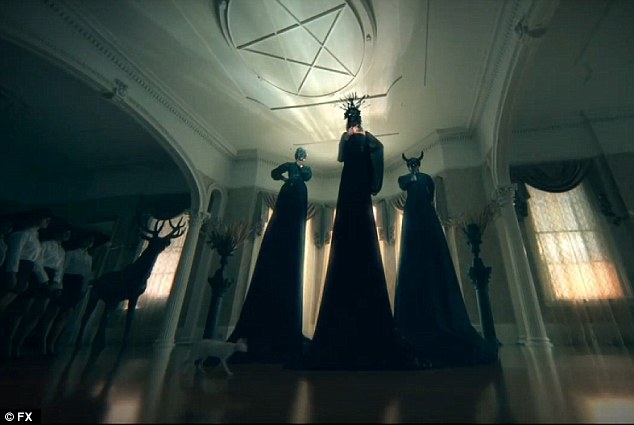 The episode begins with a flashback once again – this time providing us with some information about Hank’s background. It seems that Hank comes from a tradition of witch hunters and we meet him on a hunting trip in 1991 being taught hunting skills. He is given his weapon and with his father’s help goes out on a hunt. Hank is nervous and doesn’t want to fail his father who clearly has high expectations of his son. As the hunt progresses, Hank’s father flushes a witch out for Hank to shoot. She begs for her life but Hank’s reticence allows the witch to fight back and the boy needs to be saved. Hank’s father pushes Hank to safety and kills the witch. He is burned in the process and reminds Hank why witches should never be shown any mercy. 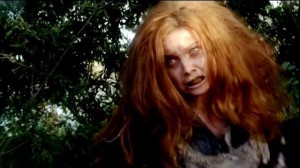 After the titles, Fiona is shown taking Delphine’s head back to Cornrow City, Marie’s salon. She is disturbed to find Delphine’s decapitated body in a cage at the back of Marie’s room and she deposits Delphine’s head, still in a box, on the table. 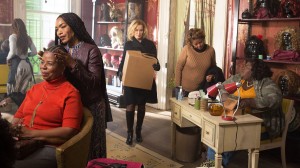 Fiona tells Marie that the witches and the voodoo queen need to create an alliance as Fiona believes that the witch-hunter who shot at Nan and Misty will turn on the voodoo tribe once the Coven has been annihilated. Fiona is, of course, unaware that Marie has sent the witch-hunter to destroy the Coven and so she refuses Fiona’s offer of an alliance – and there is a rare moment of agreement between Delphine and the Voodoo Queen (Delphine: ‘You can’t make deals with a darkie’). Marie sends Fiona away. She also gives Delphine’s head to Queenie and instructs her to burn it. 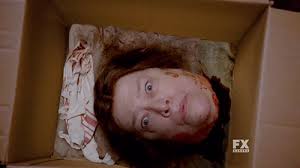 Queenie decides not to burn the head after all but takes it to her room. She has taken it on herself to educate Delphine in an attempt to sensitise her to the history of African Americans by showing her a Hollywood history of slavery and cultural integration, starting with the TV series Roots and to be followed with The Color Purple, Mandingo and B*A*P*S(!)

Delphine is appalled and sings ‘Dixieland’ to try to drown out the ‘jungle music’ but Queenie leaves her alone with the movies and a hope in the redemptive nature of Hollywood representations!

It’s All in the Eyes

Cordelia is struggling to adapt to her blindness and she struggles to complete simple tasks like cooking for herself. Myrtle offers to help her and reminds Cordelia that she has always loved her as a mother. Cordelia trusts Myrtle absolutely and says she does not need the second sight to know that Myrtle was not involved in harming her but she regrets losing her sight just as the sniper has put the Coven under threat.

Myrtle invites Pembroke and Quentin from the witches’ council to dinner and they say they are pleased that Myrtle has been bought back to life by Misty. Mid-way through a toast, Pembroke and Quentin begin to ‘freeze’ and Myrtle tells them they are suffering from human statue syndrome caused by the monkshood poison she has given them. She tells them she is not after revenge but she wishes to help the Coven and she uses a melon baller to remove their eyes – we later see that she has killed and dismembered the leaders of the council. 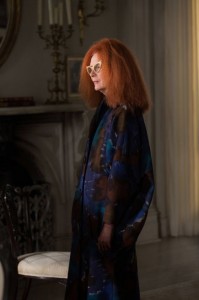 Myrtle restores Cordelia’s sight by using one of Pembroke’s eyes and one of Quentin’s giving Cordelia a striking look as she now has one blue and one brown eye. Fiona is astonished to find Cordelia ‘cured’ but she still accuses her of blinding Cordelia in the first place and she threatens to have Myrtle banished for the crime. Cordelia loses her temper with the arguing women and tells Myrtle to respect Fiona as her Supreme and she tells Fiona to stop accusing Myrtle of her blinding. Cordelia also realises that now she has regained her sight, she has lost the gift of the visions when she touches people.

This episode introduces the audience to The Delphi Trust – a corporation based in Atlanta that is the base for a collection of witch-hunters led by Hank’s father. Hank has been overlooked for promotion within the Trust and his father is clearly disappointed in Hank’s slow progress in New Orleans and his alliance with Marie Laveau. Just as in the first scene, Hank fails to win the respect of his father who reminds him that he is part of a long tradition. Hank’s father sees him as weak and accuses him of having feelings for Cordelia that are stopping him from completing his task. Even his murder of Kaylee is described as ‘sloppy’ and the Trust have to go in and clean up the evidence Hank left at the hotel. It transpires that the Trust was responsible for Cordelia’s blinding and it was an attempt to make her even more dependent on Hank.

Having been undermined by his father, Hank later finds himself racked with sudden pain and with wounds causing bleeding from the wrist and the stomach. Marie has cursed a voodoo doll and is attacking him from a distance. She calls Hank to tell him that the witches must be killed that night or she will kill him with one final needle.

Zoe and Madison go to find Nan at the hospital where she is waiting to see Luke who is in a coma after the shooting. Luke’s mother Joan had been keeping the girl away from her son. Madison and Zoe take her to his bedside and Nan is able to communicate with Luke telepathically. Joan is slow to believe this is true until Nan mentions a song she sang to comfort him when he broke his arm as a small child. Realising that Nan is able to communicate with her son, Joan allows her to stay at her son’s bedside.

Later, Nan tells Joan that God has seen all her sins – including the murder of Luke’s father who, seriously allergic to bees, was killed when she arranged for him to be stung by bees to cause anaphylactic shock as retribution for his infidelity. Luke’s mother is incensed but the accusation and throws Nan out of the hospital room.

Cordelia and Misty are working together in the greenhouse and Cordelia is helping Misty develop her skills when Hank returns to the Coven. He claims to be living in ‘a hell of regret and remorse’ but Cordelia is not at all sympathetic. She tells him she is filing for divorce and that he should collect his things and leave. On his way out he encounters Fiona and her new guard dog bought, she says, to protect the Coven seeing as Hank has failed to do so. She, like Marie and Hank’s father, mocks Hank’s masculinity and he leaves the Coven. The dog senses someone in one of the bedrooms and Fiona discovers Kyle, who is still playing with the toy Zoe left. Kyle seems pleased to see the dog and hugs him. As Fiona leaves the room we hear the sound of the dog’s neck breaking.

Later, Madison, Nan and Zoe return to the Coven to find Fiona playing cards with Kyle. At first Zoe thinks that Fiona ‘cured’ Kyle but she has only spruced him up ‘just a touch’ in order to turn him into a guard dog. Kyle again being used at the whim of one of the witches and Fiona intends to use him to attack on command. 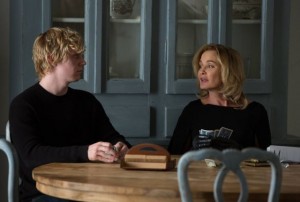 Back in Queenie’s room at the salon, Delphine has kept her eyes closed throughout Roots and so Queenie tries another medium, music. Delphine cannot cover her ears given the fact she has no hands and so she is forced to listen to Odetta’s Oh Freedom! which Queenie has set against a montage of images from the civil rights movement in the 1960s. 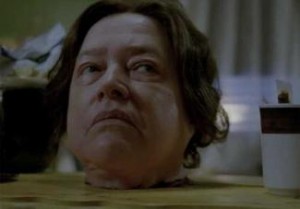 As she listens and is touched by the music, Hank bursts into the salon and shoots the women there, including Queenie and Marie. She is bleeding from the stomach but finds the strength to uses her human voodoo-doll gift, puts a pistol into her own mouth and pulls the trigger, causing Hank’s brain to be blown out.

The episode ends as we see Hank’s father distraught to see images of his dead son, Luke’s mother smothering Luke as he wakes from his coma and accuses her of murder and Marie swallowing her pride by approaching Fiona at the school – presumably to discuss the possibility of making an alliance.

With the inclusion of the Adelphi Trust into the story, the gender binary has been stated explicitly. (Adelphi was the mythological centre of the earth, (sometimes called the navel of Gaia) and the location of the Oracles). The Trust, reminiscent of the Watchers Council in Buffy the Vampire Slayer (where the Slayers were, of course, female rather than male) appear to be reinforcing a traditional idea that women are able to tap into nature, instinct and powers that cannot be defined by the rational and so need to be controlled by powerful and rational men. 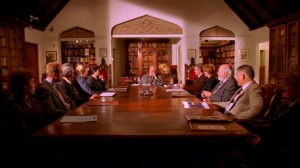 The witch-hunters seek to remove all women who exhibit their own power and this power is considered (and depicted) as a threat to males. This irrational power is found in the magic of the witches, the spells of voodoo as well as the belief systems of the religious in Joan’s Christianity. Despite her apparent morality, she (like Kyle’s mother Alicia) abuses her own son. Later she murders the men who threaten her – her husband and her son.

Other than Quentin (a camp and, presumably, gay male), the community of witches is a male-free zone and in the school itself men are either imprisoned (the Axeman), temporary (Hank), subservient (Spalding) or expedient (Kyle). The women have power within the Coven but most of them find themselves in a weaker position when it come to the men they interact with in the ‘real world’. Men don’t offer much more than either sex or protection and many of the witches use their powers to take power from men or to assert themselves from a position of subservience.

Being seen as powerful is important to Hank and the constant attacks on him threaten his masculine identity. Hank is perceived as weak and ineffectual by his father and the Trust. He is vulnerable and shown to have no defence against Marie’s attacks and both Cordelia and Fiona mock him and reject his offers to protect the Coven. As Hank can’t man up sufficiently to attack the witches, he attacks the voodoo tribe having first gained a sense of masculine power in the locking and loading of an arsenal of weapons. The attack on the salon is one white man opening fire on a collection of black women set against the music and imagery of the civil rights movement but can be seen as less about race and more about gender politics and what happens when patriarchal power is thwarted.

The series is on a mid-season break until the New Year. Old enemies have been removed and power relationships are shifting. The last ‘act’ of the series will see the true nature of the threat against the Coven but it could come from a number of fronts and there are many questions still to be answered: