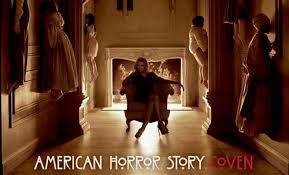 The episode begins by giving us an insight into ‘college-boy Kyle’ before the bus crash. Not the coolest of kids, he is a Toto fan and is quite happy to use the word ‘amazeballs’. He still has the enthusiasm and idealism of youth. He is at a tattoo studio with two other frat boys but he resists getting a tattoo. He says he wants to be an engineer to ensure a tragedy like the levees breaking during Katrina can’t happen again and he doesn’t want to do anything to impact on his future professional credibility. He identifies his personal philosophy saying, ‘I’ve got one life and I’m not wasting it’.

There are a couple of visual gags in this scene that prefigure future events in Kyle’s life. He spots an animated zombie doll at the tattoo studio and it makes him shudder. So too does his friends off-colour joke about ‘banging’ Kyle’s mother. Despite his upbeat persona, he is cleanly traumatised by his abusive home-life. There is a little American Horror Story reflexivity in the fact that there is a miniature replication of the statue of Mary from AHS: Asylum on the shelf of the tattoo studio.

One of Kyle’s friends had a Chinese symbol tattooed on his ankle and another a four leaf clover on his forearm – both choices are mocked by Kyle for their inauthenticity. A dissolve reveals that Franken-Kyle has these tattoos and he is acutely aware he has been constructed from other boys’ parts. Franken-Kyle’s ongoing distress has shown Zoe’s actions to be both selfish and cruel and this opening scene reinforces the tragedy of the events unfolding at the school.

Zoe seems to be intending to help Kyle out of his misery as she goes to him, concealing a pistol behind her back but Kyle takes Zoe’s gun from her. At first it looks like she may be in danger but Kyle turns the gun on himself. 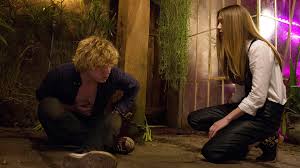 Despite the fact that she seemed ready to put him out of his misery just moments before, she stops him when he puts the gun into his own mouth saying she doesn’t want him to die. Zoe changes tack and tries to teach Kyle to communicate. She wants him to ‘function like a person’ but Kyle cannot contain his frustration and anger.

Madison provides a voice-over where she expresses her (pre-death) attempts to numb and deny the pain of living. Post-death however, she craves feeling of any kind. She binge eats and tries to burn herself, but she continues to feel nothing. 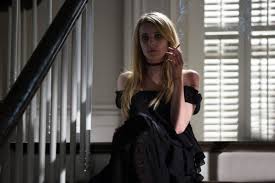 She hears Kyle shouting and after telling Zoe that Cordelia wants to speak to her she shares her feelings about returning back from the dead with Kyle, the only other person she knows who could understand how she empty she feels. The two connect and comfort one another.

Cordelia meanwhile had been woken in the middle of the night by a call from Hank. He told her he wanted to come home but she rejected him. We see, however, that Hank has an arsenal of weapons and he clearly intends to follow Marie’s instructions to destroy the coven. He ends the call ominously by telling Cordelia he will see her soon.

Cordelia goes to investigate a noise on the landing and Madison stops her from falling down the stairs. Cordelia experiences a flash of second sight when the two women touch. She is immediately aware that Fiona killed Madison.

Cordelia has recognised Zoe’s growing power and she identifies the danger that Fiona poses. Cordelia tells Zoe that there is only one way to be sure that she (and the coven) is protected – they have to kill Fiona. Still shocked and trying to take in what she has learned, Zoe stumbles on Kyle and Madison having sex.

In order to confirm Cordelia’s assertion about Fiona, Zoe magically replaces Spalding’s tongue. As it is still under Myrtle Snow’s enchantment, he is compelled to tell the truth. Zoe asks him who killed Madison and he has to admit that it was Fiona. Having learned the truth, Zoe stabs Spalding through the heart. 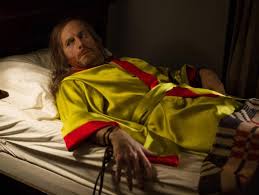 Madison approaches Zoe aware of how she feels about Kyle. She says that being with Kyle allowed her to feel something for the first time since her regeneration but says that doesn’t mean that Zoe has to give up on him – Madison invites Zoe into bed with her and Kyle.

Fiona and the Axeman

Fiona meanwhile has gone back to the Axeman’s apartment. They drink together and whilst listening to jazz, the Axeman attempts to charm Fiona. His apartment is filthy and full of cockroaches and we are shown that the previous inhabitant of the apartment is lying dead in the bathroom – clearly brutally murdered. As Fiona gets close to the Axeman she sees that more of her hair is coming out and she is clearly torn between wanting the attention of the Axeman and the ‘great romance’ and her distaste at the seediness of the situation she finds herself in. She decides to leave but the Axeman offers her uncomplicated sex and so manages to win her over. His chat up lines seem a little unusual as he quotes Faulkener (from As I Lay Dying) saying that ‘the reason for living was to get ready to stay dead a long time’. This is a philosophy that Fiona has some sympathy with.

After sleeping with the Axeman, Fiona prepares to leave. She tells him she knows about the body in the bathroom and as the mood changes she tells the Axeman she has reported him to the police. She is stopped in her tracks though when he reveals that he has been watching over Fiona since she was a small child – even stepping in to punish a bully when Fiona was a child. He tells her that he watched her grow up and fell in love with her. Fiona is livid that he has reminded her of the way her life has passed and she leaves him telling him to ‘go haunt someone else’s life’.

Returning home, Fiona, seeing more hair falling out and in horror at the disintegration of her body comes close to shaving all her hair off. Fiona has a last-minute change of heart and returns to the Axeman.

Queenie is looking for a late night snack but Madison has cleared out the cupboards in her attempt to ‘feel something’. Delphine joins Queenie and, as they are both peckish, Queenie takes Delphine for a drive-through burger. They seem to be sharing a moment of friendship together when Delphine tells her that she thinks Queenie will never truly be a part of the coven – as it is a place for ‘pretty little white girls’.

Queenie goes to see Marie who repeats Delphine’s view that the witches in the coven will never fully accept a black witch. Marie asks Queenie to bring Delphine to her and in return she promises the witch a home where she will be accepted and never thought of as second best. Marie suggests that Queenie can become more powerful by combining her witchcraft with voodoo.

Back at the school, Queenie offers Delphine friendship based on an honest confession of each others’ dark side. She asks Delphine to admit her worst crime. Delphine confesses that, having learned that her husband had fathered a child with the beautiful house slave Sally, Delphine offers Sally a promotion to the role of handmaiden where she helps with Delphine’s beauty treatments. Delphine tells her that her treatment has been made of the blood of her new born baby. The next day Sally killed herself. Queenie is outraged and what she has done but Delphine still believes that Queenie will be her true friend.

Under the pretence of getting a new haircut for Delphine, Queenie delivers her to Marie. Marie imprisons her an the final shot of the episode shows Marie applying a bloody beauty treatment made, we assume, with Delphine’s blood. 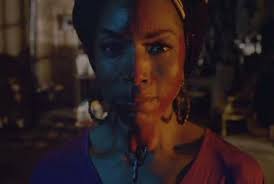 Zoe’s character has developed over the past few episodes and she has become stronger, more active and has demonstrated leadership qualities. Her witch-strength is clearly growing but it has put her in morally dubious positions:

There is evidence that under the surface the ‘old Zoe’ still exists as she retreats when she finds Madison and Kyle together but is led by the more dominant witch when Madison invites her to bed. It is no longer an option to see Zoe as the moral centre of the piece and where she may have seen like a natural hero, she is now stepping into the grey area that Fiona and Madison (and latterly Queenie) inhabit.

Queenie’s past insecurities have played on by Marie, having first been stirred up by Fiona and then Delphine. Queenie’s race and body image sensitivity has made her look outside the coven for a sense of belonging and Marie offers her precisely what she wants. She had appeared to have struck up a friendship with Delphine but was happy to abandon the friendship in exchange for power. She clearly has ambition and is willing to use Delphine to gain power. Another unfinished story line could become important here as her violent encounter with Bastien has yet to have had repercussions.

Delphine has been positioned as a racist and a psychopath. She imprisoned her own daughters, tortured her slaves and we now know she is a baby killer. Despite this we have seen a woman who wishes to learn from her past mistakes, regrets the way she treated her daughters and who has found solace in the friendship of a black girl. In terms of the simple rehabilitation narrative, Delphine has become one of the most sympathetic of characters so Queenie’s betrayal of her seems particularly harsh. Queenie’s lust for power and Delphine’s deep regret and need for friendship has caused the characters to swap narrative roles.

Kyle is, yet again, the object of the gaze. The statue of Mary appears throughout the first scene and appears to be watching over Kyle but, as we are acutely aware, her gaze cannot protect Kyle despite the fact that he is a ‘good’ boy – he is positive and driven by a sense of justice and social responsibility and yet he suffered the same fate as the frat boy rapists.

Zoe acts as judge and juror as she condemns Kyle for killing his mother (unaware that he has been the victim of sexual abuse) but then changes her mind and keeps him alive despite his misery because she doesn’t want him to die. Madison uses Kyle to try to eradicate the numbness she feels. She is only interested in him for his ‘boy parts’ and she offers him to Zoe as if he is a possession. He has become nothing more than a sexual object to her and in his new form is less than the sum of his parts. In her eyes he has lost his humanity.

Despite losing her sight, Cordelia now has the power of gazing that allows her to see people’s secrets – some of which are unknown to the people themselves. She discovers Hank’s secret affair (but not the fact that he is a witch hunter) and finds out that Fiona has killed both Madison and Myrtle

Fiona discovers that she has been the subject of the Axeman’s gaze throughout her life. She feels disempowered by this as she has been watched as she grows old. She accuses the Axeman of acting out of pity for her loss of youth and vitality but it is when she has to face her own disintegration in the mirror, she realises that being gazed upon is better than being invisible – the way she felt when men overlooked her in favour of younger women in bars.

Line of the week