The episode opens with a scene from New Orleans history. Back in 1919, the city was terrorised by a serial killer who murdered upwards of 12 people – his weapon of choice gave him his name and he is know as The Axeman of New Orleans. Famously a letter was received by press purporting to be from the Axeman and it is the words of this letter that is used as narration. In the letter the Axeman warns that he will kill again: ‘Now, to be exact, at 12:15 (earthly time) on next Tuesday night, I am going to pass over New Orleans… I swear by all the devils in the nether regions that every person shall be spared in whose home a jazz band is in full swing at the time I have just mentioned.’ 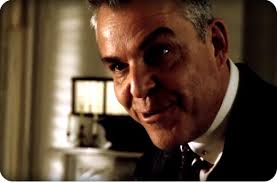 The witches of the coven decide to make a stand and unite to defeat the serial killer. They are descendants of Salem and suffragettes and so the Supreme of the time tells the witches that they should use their power to show they will not stand for being terrorised. The witches play opera rather than jazz at the time specified by the letter. The Axeman breaks in and it appears that he will kill one of the witches. She turns over the death tarot card just as he begins to attack but she blindsides him and is joined by the other witches and they stab the Axeman to death. 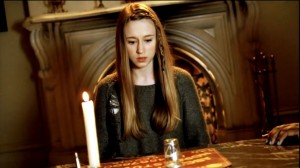 Back in the modern day, Zoe is going through Madison’s things. She finds a ouija board hidden in a secret compartment in the wardrobe along with photos of the previous members of the coven, including the witches from 1919. Zoe persuades Nan and Queenie to use the ouija board to help find Madison. Queenie warns that there are two levels to the board – contacting the dead and releasing them. As soon as they begin, the witches make contact with a spirit who claims to be the Axeman. 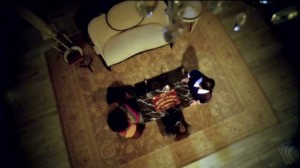 Zoe finds out the history of the Axeman and tries to persuade Nan and Queenie to try to contact him again as she is convinced he can help them find Madison. Neither of the witches is prepared to risk releasing him so Zoe decides to try again on her own. She promises to release the spirit and is directed to the attic where she discovers Spalding’s doll collection and a very bad smell. Spalding creeps up behind her as Zoe finds Madison’s decomposing body.

Zoe easily fights Spalding off and Nan and Queenie join her to question him. Zoe heats a fish slice to help persuade Spalding to answer their questions. Spalding thinks the answers to their questions and Nan reads his mind. He confesses to having killed Madison as he thinks there is nothing the girls can do seeing that they cannot turn him in. After this confession, Queenie takes some pleasure in torturing him further. Zoe is not wholly convinced and doesn’t think he’s telling the truth.

Confirming that Madison was not in line to be the next Supreme, Fiona still has cancer. Despite not wanting to have to deal with the side effects of the treatment, she is undergoing chemotherapy for her cancer. She says she has chosen to fight the disease as Cordelia’s disability means that she needs Fiona’s help and support. The treatment clearly frightens Fiona as it taps into her fear of physical deterioration and the lack of vitality she is feeling. She finds that the medication gives her the ability to hear other people’s thoughts and so she is not only facing her own fears but she can also hear the fears of the others around her. Clearly feeling vulnerable and afraid, she says that all she wants is one more ‘great love’ before she dies. 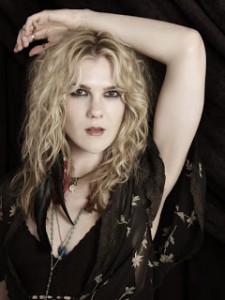 Misty is tending a buried Myrtle in her garden when Kyle arrives having been missing since Halloween. Misty tries to bathe Kyle but he becomes violent when he has visions of his abusing mother and in his confusion he lashes out at Misty. Misty tries to calm him down but loses patience with him when he destroys her 8-track. Once ‘he broke Stevie’ Misty washes her hands of him just as Zoe turns up to ask for Misty’s help.

Zoe takes Misty back to the school and Kyle has to be restrained whilst Misty and Zoe discuss the possibility of re-animating Madison. Misty is afraid that Madison has been dead too long to be  successfully resurrected. Zoe insists they try though and after some persuasion Misty agrees. Madison is revived but she has limited memory as to what had happened to her – she does remember who she is and that she is a successful movie star but has no recollection (at the moment) of the way she died. 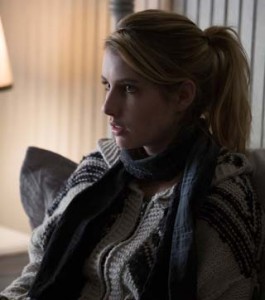 Cordelia returns home and she has retained ‘the sight’ which is generated when someone touches her. She has a vision of her husband with a redhead and knows he has been unfaithful. Hank  tries to play it down but Cordelia throws him out. When Fiona touches her, Cordelia sees the death of Myrtle and she is distraught at the loss of the older witch and she clearly doesn’t believe Myrtle was the one who threw acid in her face. 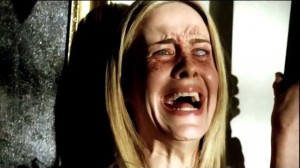 Meanwhile it is revealed that Hank is working for Marie Laveau. It transpires that he is a professional witch hunter. He has infiltrated the coven and has been killing the descendants of Salem that have been found by Cordelia. This is where he was made aware of Kaylee. Cordelia had identified as a witch after she had been arrested twice for arson. She recognised her as a descendant of Salem and offered her a home with the other witches in the coven. Kaylee decided not to stay as she has no desire to be powerful. She simply wishes to ‘find a good husband and have three kids’. Hank had clearly sought Kaylee out in order to kill her. She was one of nine witches Hank claims to have killed. Hank seems to think that Marie was responsible for blinding Cordelia but Marie scoffs at the idea but mocks Hank as she thinks he has fallen in love with Cordelia and this has made him weak. Still enraged by Bastien’s decapitation she instructs him to kill all the witches at the coven – including Cordelia and Fiona.

Cordelia is struggling to get used to coping without her eyesight.  As she is getting each for bed, she realises she is not alone and the manifest spirit of the axman is in the room with her.  He asks Cordelia to give him release and is clearly angry that Zoe rare eyed on her promise. He threatens Cordelia and her screams bring the other witches to her room. Zoe looks for a spell and is able to use her manic to find the spell that they need and the axman appears to be gone. The spell hasn’t worked as Zoe expected as he is now a fully physical entity and leaves the school by the front door.

In the final scene we see Fiona drinking alone in a jazz bar. She realises that the chemo is causing her to lose her hair and so she seems flattered when a man joins her at the bar and asks her if she’d like a drink. The man is, of course, the Axeman… (to be continued)

The episode’s title, The Axeman Cometh, is a play on the title of a 1939 play, The Iceman Cometh, by American playwright Eugene O’Neill. The play is set in a seedy bar frequented by a group of delusional people who are regularly drinking themselves into oblivion. The characters are all living on false hopes – in their own way each character allows himself the comfort of believing in a pipe-dream. They get excited over the sporadic arrival of a travelling ice salesman (the iceman) who is known for throwing a good party. Their ‘hero’ turns out to be a misogynistic cheating wife murderer. He is a character who seeks to destroy everyone’s delusions and tries to make them face the falseness of their pipe-dreams – in the play this leads to tragic outcomes. Both the Axeman and Hank destroy life and, therefore, the dreams and desires of their victims. 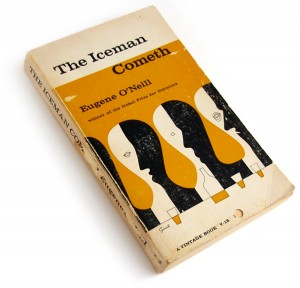 American Horror Story: Coven is filled with characters who have pipe-dreams and then have them taken away. Kaylee wanted to be a conventional wife and mother – a pipe-dream shared to some extent by Cordelia. Fiona and Delphine both wanted second chances with their daughters and both believed they could find a way to fight the inevitability of ageing.

The Axeman’s murderous spree destroyed the hopes and dreams of his victims and the final scene of the episode implies that he may be about to destroy Fiona’s dream of having one more great romance before she dies. Spalding’s pipe-dream of a necromantic ‘happy family’ with Madison and his dolls is destroyed in this episode too but Hank can be seen as the real manifestation of the iceman. He destroys Kaylee’s dreams by putting a bullet in her head and he denies Cordelia of a ‘good husband’ and support as she comes to turns with the realisation that having a family was a dram that would never be realised. She is yet to discover that he has been actively attempting to destroy the coven she is duty bound to protect – effectively destroying her dream of creating a vibrant community of witches.

Line of the Week