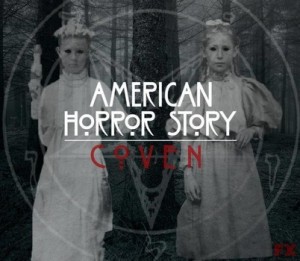 In last week’s episode Delphine appeared to imply that she was unfamiliar with the idea of ‘trick or treat’ as part of Halloween. Not so – the opening scene shows she threw Halloween parties that focused on tricks rather than treats. Potential suitors for her daughters were asked to put their hands in covered bowls of real eyeballs and innards rather than the peeled grapes and sausages they may have been expecting. Delphine’s daughters see yet another potential suitor (the Governor’s son no less) being frightened off by their mother and so they begin to hatch a plot to get rid of her. Learning of this, she has her daughters imprisoned in the attic and threatens to keep them there for a year – saving the worst punishment for the ringleader Borquita.

In the modern day, as Halloween evening progresses, the witches at the school find themselves surrounded by zombies and it is the reanimated bodies of Delphine’s daughters, led by Borquita, who make it to the front door first.

Just before the zombies arrived, Luke had delivered Halloween cookies much to Nan’s delight. Luke believes the zombies to be local kids playing a prank so he goes outside to try to reason with them. He is amongst them as Marie commands the zombies to ‘begin’ and they start to attack – eviscerating a group of local teens who had gone to marvel at their prosthetics. Zoe has to stop Delphine from going outside to find Borquita and misses Nan slipping outside to try to save Luke. Zoe takes charge inside the house and sends Queenie and Delphine upstairs out of harm’s way before going outside to try to save Nan. Luke has been injured and Nan gets him to relative safety inside a car. The zombies soon begin to break into the car but they are distracted by Zoe who draws them away and takes what is obviously temporary shelter in a garden shed. Nan tries to get the wounded Luke back to the house but the zombies soon have them surrounded.

As all seems lost, Zoe emerges from the shed with a chainsaw and hacks the zombies into pieces. One zombie remains as the chainsaw stops working and for a moment it looks like Zoe may be defeated. Suddenly she raises her hand, mutters an incantation and the zombie falls to the ground. Marie’s magic has been disrupted and whilst she’s not sure what happened Marie is sure that ‘they’ve got some real power in that witch house now’.

Meanwhile, Borquita has made her way to the kitchen window where Delphine sees her and is overcome with maternal guilt. She lets the zombie into the house and expresses her regrets for being a terrible mother and she offers to try to make amends. Borquita responds by attempting to choke Delphine.

Borquita then makes her way upstairs attacking Spalding and Queenie. Queenie tries to fight back but her magic cannot stop the zombie’s attack. Borquita is finally bought down by Delphine with a poker through the heart. Delphine realises that this releasing her from Marie’s spell been the only act of maternal kindness Delphine had ever offered her daughter. 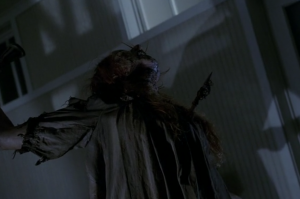 Claudia has been badly disfigured by the acid attack at the bar and Fiona rushes her to hospital. The doctor says that Cordelia has been blinded by the attack. Fiona, unable to cope with the news, self-medicates and then goes to find the hospital pharmacy for more supplies. She manages to acquire a cocktail of pills to add to the alcohol she has with her and, in a foggy state, makes her way through the hospital. 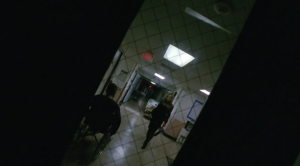 She is clearly feeling guilty about what has happened to Cordelia: she hallucinates being told that she ‘might as well have’ thrown the acid in her daughter’s face.  She pauses as she wanders the hospital halls to bring life to a stillborn baby placing her back in the arms of her mother.

Fiona is at Claudia’s bedside when Hank returns and she vents her anger at him. She tells him he can have 15 minutes with her daughter but then she wants him to disappear – his way or (unspecified, but decidedly ominously) her way. Hank offers his love and support to Cordelia but when he takes her hand Cordelia has a vision and she is aware of his infidelity.

The next morning Nan and Zoe are busy burning the zombie bodies and Fiona thanks Zoe for protecting the coven. Delphine expresses her maternal regret and she and Fiona appear to be sharing some common ground. Delphine hopes their shared tragedies may bring them closer together but Fiona dismisses the idea declaring that she doubts it as Delphine is ‘after all, the maid’.

The council arrives back at the school and this time they are intend to remove Fiona from the coven by demanding her abdication. Fiona turns the tables back on them and implicates Myrtle in the attack on Cordelia. When Fiona reveals acid burns on Myrtle’s hand and the fact that she was in New Orleans when Madison disappeared, the council declares Myrtle guilty and she is sentenced to death by fire. Myrtle says that she is innocent but goes ‘proudly to the flame’. She is clearly horrified but her love for the coven runs deep. She said she had always felt like an outsider but thought she belonged in the coven. 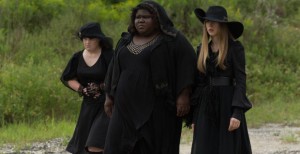 The execution takes place in a scene reminiscent of a 70s spaghetti western/Tarantino movie and is accompanied by Dr. John’s Right Place Wrong Time. Zoe can’t believe what the coven are about to do. Myrtle warns them that Fiona will bring danger to them all. Fiona lights the fire and Myrtle dies in agony before the collected witches. 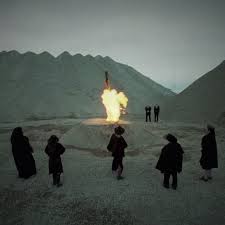 Queenie goes to Fiona as she realises she was involved in framing Myrtle. Queenie caused the burns on Myrtle’s hand by putting her own hand in acid and passing the wound on to the council member. Queenie’s guilt is soon soothed by Fiona’s promise to mentor her for the role of Supreme. Queenie likes the idea of being the first Supreme of ‘colour’ and seems to forget about Myrtle as she accepts Fiona’s offer of tutelage. 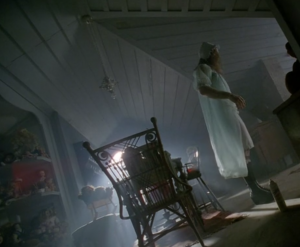 Spalding, still dressed in nightgown and bonnet, has Madison’s redressed body in a basket. The smell is clearly awful and he tries to cover it with air freshener. Madison’s body is decomposing to the extent that when he tries to take her out of the basket, her arm comes clean away.

Misty Day appears at the Myrtle’s execution site and finds the horribly burned body. She takes hold of Myrtle’s face and uses the power of resurgence to bring life back to the dead witch. 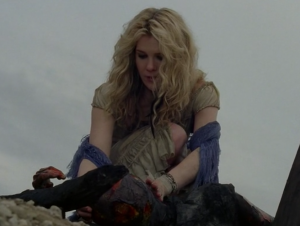 Like episode 3, this episode is about motherhood but instead of a focus on bad mothering, this episode looks at the maternal instinct and how, even in the most selfish or cruel mothers, the desire to protect is undeniable. Both Delphine and Fiona have been terrible mothers. Delphine was active in her physical and psychological abuse of her daughters whilst Fiona was a bad mother though neglect and absence. Fiona has been absent for much of Cordelia’s life but when present she is hyper-critical and acts totally in her own self-interest. Cordelia’s own instinct to become a mother drew her in desperation to ask Marie for help when she discovers she cannot conceive. Unsurprisingly, Fiona berates her for this saying she is showing weakness. She also accuses Cordelia of being an inadequate mother-figure for the girls in the school. Fiona’s behaviour changes though when Cordelia is hurt and in acts of maternal protection she rushes her daughter to the hospital and demands that Hank leaves Cordelia alone. Having seen Hank’s true nature in the previous episode we cannot help but side with the ferocious mother who wants to protect her daughter from this ‘loser’. With Cordelia hurt, the instinct to protect motivates Fiona’s actions but the knowledge of how bad a mother she has been drives her into inebriated guilt. Her act in bringing the stillborn child to life acts as a channel for her to express how she feels about Cordelia. She gets the grieving mother to say things to her baby that presumably Fiona has never said to Cordelia. Despite the fact that Fiona has been critical and judgmental each time we have seen her interact with her daughter, this is the ‘second chance’ she wishes she had. She gets the grieving mother to tell her daughter she will never leave her and that ‘she’ll be [her] mother’ forever.

Delphine too finds herself instinctively drawn to her daughters despite the fact that they are zombies and that they are threatening her and everyone in the coven. When alone with Borquita, she tries to reason with her daughter and acknowledges what a terrible mother she has been. When Borquita attacks Delphine, the mother is passive but when Borquita threatens Queenie, she fights back. Since Queenie has saved her life, Delphine has taken on the role of mother to the young witch; nurturing and protecting her. Delphine’s relationship with Queenie may now be under threat as Fiona has stepped in to act as Queenie’s tutor and mentor.

Other mothers in the episode include Zoe, who takes charge and acts ferociously to protect the coven and Myrtle who declares she was more of a mother to Claudia than Fiona has been. Spalding perverts the idea of motherhood by dressing up and arranging a tea-party. His children are dolls or the poor dead Madison. 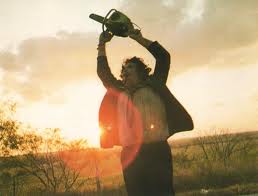 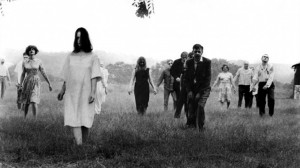 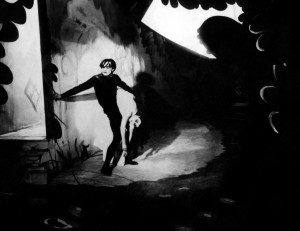 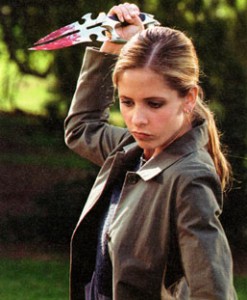 Line of the Week