As this is the first of a two part episode, the themes and issues will be considered next week.

The opening of the episode takes us back to 1961, and a culture taking its first steps towards racial integration. Cora, an employee of Marie’s in the salon has sent her son to a racially integrated high-school. She is filled with optimism despite all the other women’s words of caution.  Tragically Cora’s son is found lynched and, in retaliation, Marie summons zombies to exact revenge. Whilst in a trance, Marie is able to raise the dead and control them and she sends them to mutilate the white men who killed Cora’s son. Later we learn that after years of bloodshed in the conflict between the two tribes, Marie became the hero of a truce called between the white witches and Voodoo culture. Further conflict was avoided by drawing firm boundaries between the communities and ensuring neither crossed over into the other group’s territories. 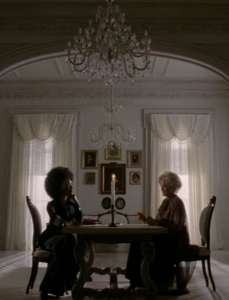 Marie and Anna-Leigh call a truce to the conflict between the witches and voodoo culture.

This episode offers a little insight into Spalding’s strange world as we see him taking tea with his large collection of dolls. This takes place just before the events of episode 3 and we see Fiona killing Madison again, but this time from Spalding’s point of view. The silent butler is willing to remove the body and look after Fiona. 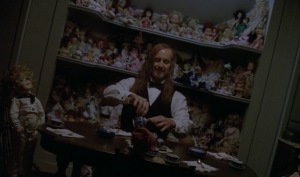 As Spalding prepares to move Madison, Fiona hears a noise in the greenhouse and finds Queenie beaten and bloodied after her encounter with the Minotaur. Fiona wakes Cordelia who tries to heal some of Quennie’s wounds with a poultice but Queenie’s injuries are severe and Cordelia’s magic fails. Queenie dies but Fiona breaths life back into her. She is, however, furious with Cordelia for going to Marie for help and, in her eyes, undermining the coven. She also berates Cordelia for losing control over the girls in the school, allowing them to get themselves into dangerous situations.

A Visit from the Council of Witchcraft 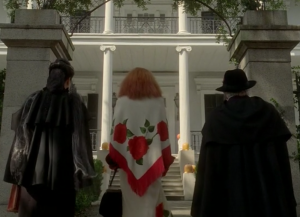 As Queenie begins to recover, Nan announces that the school is being visited by the Council of Witchcraft in the form of Pimbrooke, Quentin and Fiona’s old adversary, Myrtle Snow. In her panic, Claudia tells the council about the attack on Queenie and then her visit to Marie in the belief that these events are what drew the council members to the school. They reveal they are there as Nan suspects that Madison is dead. The Council begins to question the witches and after Nan tells them that Madison’s magic powers were developing. Myrtle is convinced that she now knows what has happened and she lists Fiona’s ‘failings’ as the Supreme and connects Fiona to the deaths of both Anna-Lee and Madison. The punishment for harming another witch is death by fire. 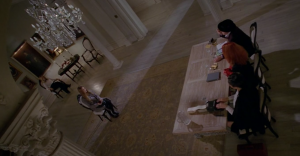 The council mounts an investigation

A flashback takes us back to the school in 1971 when Fiona is announced as Supreme and Myrtle already has her suspicions feeling sure that Fiona is lying about what happened to Anna-Lee. Myrtle notices Spalding’s unquestioning loyalty to Fiona and she casts a spell that would make it impossible for Spalding to utter a lie. Later than night Spalding is found with his tongue cut out. Spalding, knowing he would be forced to speak against Fiona, summons her and tells her he loves her. He then proceeds to cut out his own tongue with a razor. Myrtle clearly believes Fiona to be responsible for the mutilation and in the present day Spalding is told to write down the name of the witch responsible for his injuries – he writes ‘Myrtle Snow’. Myrtle is enraged as Fiona keeps ‘getting away with it’. Cordelia tells Myrtle that her logic is wrong as Madison could not be the next Supreme as she did not have the ‘glowing radiant health’ that characterises a Supreme in waiting. Fiona is shocked to learn she has killed the wrong girl.

Kyle, still bloody from the murder of his mother, is disintegrating further. Zoe finds him beating his head against the side of the bath and the distraught Zoe realises that re-animating him has been cruel and has done nothing but caused huge mental torment for the boy. She decides to make his some food and whilst preparing it she sees a packet of rat poison. We see her reaching for the packets and then she takes the food to Kyle. By the time she gets back to the bathroom, Kyle has gone.

Claudia believes her husband to be in Baton Rouge for work but he is there to meet with a woman (Kaylee) and they are soon in bed together. 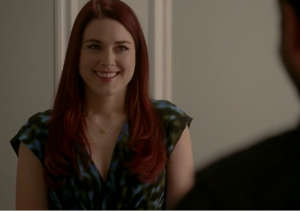 Kaylee doesn’t know what’s in store for her

Hank is almost demonically enthusiastic in bed and the couple soon seem to be relaxed and comfortable with each other in the domestic setting they are creating for themselves. Kaylee expresses how much she likes Hank and, without warning he takes a gun from his waistband and shoots her in the head.

Cordelia and Fiona began the episode at odds with one another and Fiona is livid that Cordelia may have undermined Fiona in the eyes of the Voodoo Queen. Later Fiona steps in to take over from Cordelia when she is talking to the council, again showing her disappointment in the way her daughter is handling the situation. After Fiona learns that Madison could not have been the next Supreme she takes Cordelia out for drinks where they promise to be truthful with one another. Fiona of course lies without pause when asked if she killed Madison. Cordelia avoids Fiona’s question about who the next Supreme may be and having drunk too much is later attacked in the bathroom by a masked and hooded character who throws what appears to be acid in her face.

As Halloween begins Nan mourns the passing of Madison but Zoe says they cannot be sure she is dead. Meanwhile, Spalding continues his Halloween tea-party, this time dressing some of the dolls in costumes and dressing himself in a nightdress and bonnet. We see that he has a guest of honour as he has not disposed of Madison’s body after all – she is propped up in a chair with a cup and saucer amongst the other dolls.

As a post script to the opening scene Marie is doing the now elderly Cora’s hair in preparation for the Mayor’s Halloween banquet. After the attack on Queenie, Bastien has been decapitated and his head sent back to the Voodoo Queen. It appears that, despite losing his head, the immortality spell has kept him alive and Marie is outraged at what has been done to him. She breaks the truce between the witches and the voodoo community by raising zombies in retaliation for Bastien’s decapitation. The zombies, including Delphine’s daughters, have been sent to attack the school.

Quote of the week – runner up 1 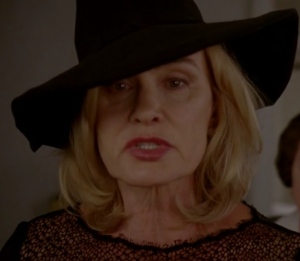 This is the baddest witch in town

Quote of the week – runner up 2

Biggest hint of a plot twist in dialogue of the week

Coincidence of the Week

Even though it seems unlikely to be connected, the name of the man Hank has told Cordelia he is in Baton Rouge to meet is Phil Underwood – a name shared by a UK based folk musician specialising in Cajun and Zydeco music!