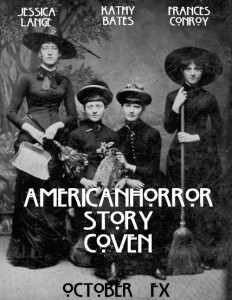 Fiona has Mme L locked up in the school and she discovers that, back in 1840, she was given an immortality potion by the voodoo queen Marie Laveau. Taking revenge for the inhuman treatment of her lover Bastien (who was turned into a Minotour), Marie murdered Mme L’s husband and daughters but the punishment for the now immortal Mme L was to be buried alive.

Fiona goes to the Ninth Ward where she finds the still beautiful and glamorous Marie Laveau running a hairdressing salon. In a tense discussion we learn that the practitioners of voodoo and witches have become enemies despite the fact that it was Tituba, a house slave and Voodoo Queen who taught the Salem witches the dark arts. Marie refuses to give Fiona what she wants – the immortality potion – and so Fiona starts a fire in the salon in an attempt to intimidate Marie and as a display of her power.

Meanwhile, the telepath Nan is annoyed by the sound of Mme. L’s thoughts so Nan unties her and lets her go. Queenie investigates what’s going on and Mme. L knocks her unconscious after calling her ‘slave’, much to Queenie’s outrage. Mme. L escapes from the school to be found later by Fiona sitting on the porch of her old house. Mme. L is clearly disturbed by the fact that her house has become a ‘museum of horrors’ and she still experiences grief over the loss of her murdered daughters (but not so much over the loss of her husband). Fiona offers no sympathy and she takes Mme L back to the school after warning her she would re-bury her if she tried to escape again.

Zoe finds it difficult to accept the death of Kyle given that he was not involved in the attack on Madison. Madison has little sympathy for him and sees him as ‘guilty by association’. The police arrive at the school. Zoe’s visit to the hospital was caught on CCTV and the police have connected the deaths of the frat boy and Zoe’s first boyfriend. Fiona deals with the police by casting a spell to make them forget their suspicions but only after Zoe, in a fit of panic, has admitted everything to the police. Fiona is enraged by the girls’ stupidity and reminds them that they are the ones with power and declares that, ‘in the whole wide wicked world, the only thing you have to be afraid of is me’.

Madison takes Zoe to the morgue where Madison breaks in. She has a resurrection spell and plans to bring Kyle back as a ‘thank you’ to Zoe for killing the frat boy who instigated the gang rape. The victims of the bus crash are in body bags but their remains are horribly mangled and are, quite literally, in pieces. Madison wants to mix and match the body parts to try to create the ‘perfect’ boyfriend. The girls sew body parts together and cast the resurrection spell. At first it appears that the spell fails as Kyle remains lifeless. Zoe remains behind to say a final goodbye to Kyle and is neatly caught when a coroner returns to the morgue. Kyle finally reanimates and kills the coroner. Zoe takes the disoriented boy out of the morgue and, as they drive away, Kyle gets more and more agitated.

To Zoe’s surprise Misty Day appears in the back of the car. By casting the resurrection spell the girls had attracted Misty to the morgue. We had been shown at the start of the episode that she had survived being burned at the stake – no doubt down to her gift of resurgence. Misty was found wandering the swamplands by alligator poachers who she killed when they threatened her. Poetically, she reanimated the alligators killed by the poachers who then dragged the men into the swamp. Misty takes Zoe and Kyle to her cabin in the swamp and treats Kyle’s wounds. She promises to look after him and insists that Zoe promises to return. Zoe does so but there is a sense that the sight of the murderous and agitated Kyle has disturbed her deeply. 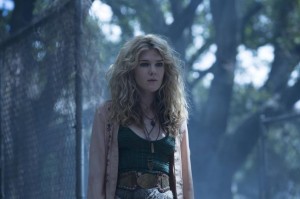 As the episode offers less exposition, themes are beginning to develop. The past and the present collide in Fiona, Marie and Mme L’s story arc. At the centre of their relationship is the idea of immortality. In the first episode Fiona denies it is cosmetic youth she wants but declares she desires ‘vitality’. She is railing against the inevitability of ageing and the losses this brings. Her discovery of Mme. L shows her that there is a way to get what she wants and in her discussion with Marie we get a sense of desperation in her appeal. Of course immortality was used as a punishment for Mme. L and her emergence in the world has heightened her grief and sadness. The first thing she learns is that the world has moved on around her and she has no place in the modern world as everything that was real to her has become a museum. Her life is now a story, a myth and she has become irrelevant. Marie used immortality as a punishment but in keeping Bastien alive has also used it for selfish reasons. The fact that the Minotour needs to be chained up does not bode well.

The younger witches are involved with immortality too. Misty has immortality as a gift and can bring the dead back to life. We didn’t know the character before she was burned but she is clearly slightly unhinged. Her offer to look after Kyle and her appeals to Zoe to return, come across as needy. She has been shunned by her community, is not a part of the coven and is living in total isolation. Her immortality has removed her from the world and it appears that Kyle would simply be unable to integrate into regular society – certainly at this point. Reproduction is closely connected to the idea of immortality – if not for ourselves, then for our genetic line. The resurrection of Kyle is unashamedly a ‘Frankenstein’s monster’ tale. Madison abandons the ‘baby’ before its birth, Zoe finds herself overwhelmed and Misty steps in to care for Kyle in a semi-maternal fashion. Like American Horror Story: Murder House, pregnancy and birth look to be an important part of Coven. 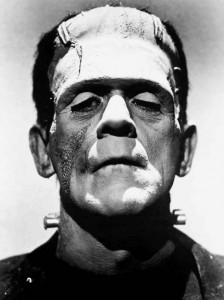 Another issue that is bubbling under the surface is race. Queenie says she didn’t know there was such a thing as black witches but the discussion about Tituba indicates that there has been a division between the magic of voodoo and that of witches and that this division is largely racial. Mme. L’s violence was racial as she tortured and murdered slaves. Although her behaviour broke the ‘black codes’ that legislated the way that slaves should be treated (offering some ‘protection’ but ultimately reinforcing the supremacy of whites) Mme. L’s attitudes reflected the fact that the dominant white culture saw black people as low status and as property. Racial hatred was approved of and reinforced by the state of the time. Mme. L argues that she was a woman of her time implying that her attitudes to race (at least) were nothing more than ‘normal’ in her culture and her ingrained racism is shown in her response to meeting Queenie for the first time. Fiona is now in conflict with Marie as the witch wants what the voodoo queen has – it is clear this antagonism between the tribes is a race issue.