(this blog will contain spoilers – please watch the episode before reading) 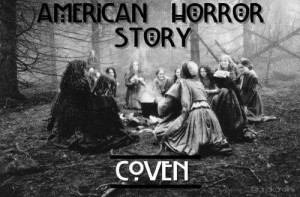 In the manner of a prologue the episode opens in New Orleans in 1834 where Madame Delphine LaLaurie is holding a soirée to introduce her daughters to the gentlemen of New Orleans society. One of her daughters makes a play for a house slave (Bastien) and LaLaurie, fresh from her nightly ‘beauty regime’ (later revealed to be the application of a poultice made of ground up human pancreas) is so angered at the threat posed to her daughter’s purity (and, therefore her social value) that the house slave is accused of attacking the girl and is taken to LaLaurie’s attic. He is strung up and, with the addition of a bull’s head, is turned into a living Minotour to satiate LaLaurie’s sadistic power-plays. Later in flashback we see LaLaurie being given a love-potion ‘to ensure her husband’s fidelity’ by a visiting black woman (Marie Laveau). Soon after taking the potion it becomes clear that LaLaurie has been poisoned and it is revealed that Marie is Bastien’s lover.

Meanwhile in the present day, teenager Zoe Benson unwittingly kills her first lover with a destructive power unleashed by having sex. She is distraught to learn that her power comes from being a direct descendent of the Salem witches. Now her power has manifest itself, Zoe’s mother decides to send her to a school for girls with similar ‘gifts’. She arrives at the school run by Cordelia Foxx and she meets three other young witches, Queenie, Nan and Madison. Here she learns that the witches are are a ‘dying breed’ and the school aims to teach the girls to control their ‘gifts’. A cautionary tale about the burning of Misty Day is told to show what happens when witches’ gifts are shown to the outside world. Madison befriends Zoe and invites her to a frat party which ends in tragedy as Madison is drugged and raped by a group of frat boys. In her anger she uses her witch power to overturn the boys’ bus killing all but two of them. One of the dead, Kyle, was innocent and had been striking up a friendship with Zoe at the time of the rape. Zoe goes to the hospital in the hope of finding Kyle amongst the survivors. She discovers he died in the crash and in an act of vengeance subverts gendered expectations about sexual assault as she rapes the comatose instigator of the rape, causing him to bleed out and die. 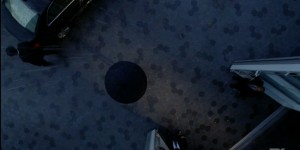 We also meet Fiona Goode and soon learn she is Cordelia’s mother and ‘The Supreme’ – the most powerful of the witches. Fiona is obsessed with finding the secret of eternal youth and has been funding medical research to this end. She demands access to a rejuvenation drug ahead of human trials and the scientist in charge of the research resigns in protest. Fiona attacks the scientist and drains him of his life-force with a murderous kiss. Fiona travels to the school where she receives a cool welcome from her daughter. Having heard about Misty’s violent death, Fiona decides to involve herself in the young witches’ education and one of her first acts is to take them on a field trip to Mme LaLaurie’s house. Nan is able to sense the ‘lady of the house’ and Fiona excavates the garden and finds Mme LaLaurie buried alive.

The Witches and their Skills

There is a lot of exposition in this first episode as we meet characters from two different time frames but the themes of the season are already becoming clear. The programme presents us with a matriarchal culture setting itself against patriarchal violence and oppression. The witches’ power is both sexual (Zoe and Fiona) and is used to wreak vengeance on the perpetrators of violent acts (Madison). Mother and daughter relationships are problematic and Zoe’s final voiceover identifies the importance of the supportive sorority of women who exist outside of mainstream culture and who are feared and misunderstood by it: ‘like it or not we need each other, and need each other desperately’. A parallel between the slaves of the past and the coven of witches is made and he two mature matriarchal figures share the same insecurities over ageing and losing their vitality.

American Horror Story regularly includes references to real-life stories. The 19th century characters are based on real-life figures – Mme LaLaurie is described as one of the earliest recorded serial killers and her story is being integrated into the tale of the Coven. The voodoo culture of New Orleans is being referred to in the character of Marie Laveau – based on another figure from history. The rape of Madison has overtones of recent ‘frat boy’ rape cases in the US, especially in the fact that the assault is recorded by the attackers and the instigator tells the other frat boys to delete the videos from their phones as they make their escape. Finally, the New Orleans setting works as a location with strong links to voodoo and witchcraft. This is post-Katrina New Orleans and so it also works as a location that is outside the mainstream and the city has its own sense of otherness given its isolation after the levees broke and the city found itself having to cope with near destruction. 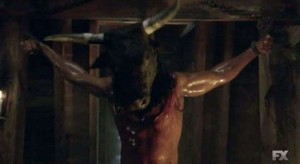 The episode uses a range of techniques to create an aura of mystery and suspense. The direction is unconventional and a range of different camera shots are used: fish-eye lenses, overhead shots and obtuse low-angle viewpoints all act to destabilise the viewer. The episode uses jump cuts and fast moving images in the front of the frame to create feelings of uncertainty and trepidation. 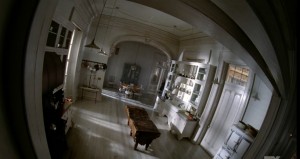 Although the episode itself has little in the way of extreme violence there are a number of disconcerting images of imprisoned and tortured slaves and most startling is the Minotaur itself. Music is also used to create atmosphere from the mournful theme used when Zoe finds out she is a witch to the psychedelic rock-out of Fiona’s response to the youth drug and the disturbing electronica soundtrack to the gang-rape.

Quote(s) of the Week

Quote of the Week…