All the mean spirited anti-Ruby feeling on Twitter was for nothing. It wasn’t a fix and Paul Hollywood did not let the ‘pretty one’ win. The climax to this year’s Bake Off showed the prize being awarded to a creative and talented baker who had shown stoicism when being judged negatively and a quiet self assuredness as she created her bakes. Exactly the resolution expected in the Bake Off – totally and absolutely fair. Congratulations to Frances!

The Great British Bake Off will inevitably be different next year. It’s going to BBC 1 as it has become mainstream, mass market entertainment. It’s increased popularity may have been one of the reasons for the more vitriolic commentary in social media. Sadly, the sniping and conspiracy theories run counter to the positive, supportive camaraderie that is central to the show’s success. The Class of 2012, shown before this year’s Bake Off final was a reminder of more civilised days! Hopefully the increasing use of social media won’t turn the programme into the kind of reality TV where contestants are not judged on their talents but on their ‘saleability’ as tabloid newspaper and Heat magazine products. 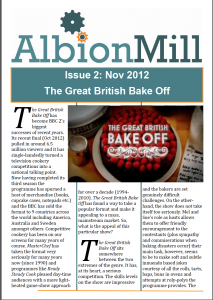