The BBC is often one of the targets of the Daily Mail’s vitriol and to me, one of BBC4’ biggest fans, the upside to having a state funded public service broadcaster seems very clear. One look at ITV’s schedules should make us all very wary of the way choice would be curtailed if there was a reduction in the types of broadcasters we have available to audiences here in the UK. Sometimes BBC news really lets the side down – whether it is its shameless sycophancy (the Royal Wedding/Jubilee coverage), its embarrassingly desperate attempts at ‘yoof‘ appeal (the Royal Wedding/Jubilee coverage) or its ‘missing the point entirely’ political debates that seek to create entertaining adversarial conflict rather than inform or educate its audience. BBC news often works on the assumption that news audiences need sensation to remain interested in hard news stories. This belief is inherent in much news broadcasting with TV news often providing highly simplified discussions with an over-reliance on vox-pops and celebrity stories.

Newsnight (BBC2) and the Today programme (Radio 4) take a more serious slant on the stories but political debate is being shaped more and more by an aggressive approach to questioning that does not advance debate and democracy – it could be argued that on occasion this style of questioning is actively shutting discussion down.

One of the biggest, most complex and urgent issues over the summer was the internal conflict in Syria and the potential for western military intervention. Just before the commons debate and vote on this issue, Diane Abbot MP was interviewed on Radio 4’s Today programme (Aug 28th). You can listen to the interview here. Today is the flagship BBC radio news show. It broadcasts interviews with politicians early in the morning, often setting the news agenda for the day. Abbot attempted to discuss whether or not the UK should support US led military action in Syria. The BBC presenter had a different agenda though and the interview acts to illustrate the focus that is placed on adversarial interview techniques and the interview deteriorated into an attempt to ‘force’ Abbott into saying something that may harm her career or force her into announcing her resignation should she disagree with her party leader on this issue. This personality politics rather than debate on the legality or even morality of armed intervention dominates the news media and massively dilutes the potential for actual political debate. The BBC are expected to present news in a fair and non-biased way ensuring that all political views receive air-time. Sadly, the rush to create headlines and a somewhat patronising view of their audience often leads to these types of debate where the public is no wiser on the issues either side of the debate.

The results of The House of Commons vote are here: Diane Abbott did not have to resign – although she has since been removed from her post in a shadow cabinet reshuffle.

More recently a Labour politician was accused of being ‘boring’ when she appeared on Newsnight. The producer of the BBC programme tweeted the comment angering Labour central office and upsetting the politician herself (see below). Although, when politicians insist on mindlessly regurgitating soundbites and ‘the party line’ they might expect a bit of criticism. Perhaps this is one of the reasons why news programmes try so hard to create conflict?? To be honest, the most offensive part of the producer’s tweet was the ‘down with the kids’ language used by a 40-something year old Oxbridge graduate. 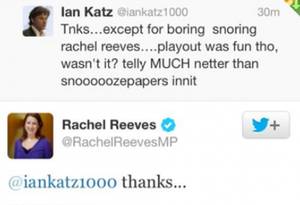