It’s a commonly held idea that bullying is a manifestation of fear. Bullies fear difference and as they do not have the intellect or the articulation to be able to engage and consider difference, they attack it. This lack of engagement means that bullies perceive difference as a threat, so some attack physically, some emotionally and some verbally. The advice given to children is to stand up to bullies – the absolute opposite of what a bullied person would want to do. It took a level of bravery not usually seen in our political class for Ed Miliband, a man whose politics is distinctly different to that of the Daily Mail’s, to stand up to one of the media’s worst bullies last week in his ‘right to reply’ to the Daily Mail’s hatchet piece on Miliband’s father. 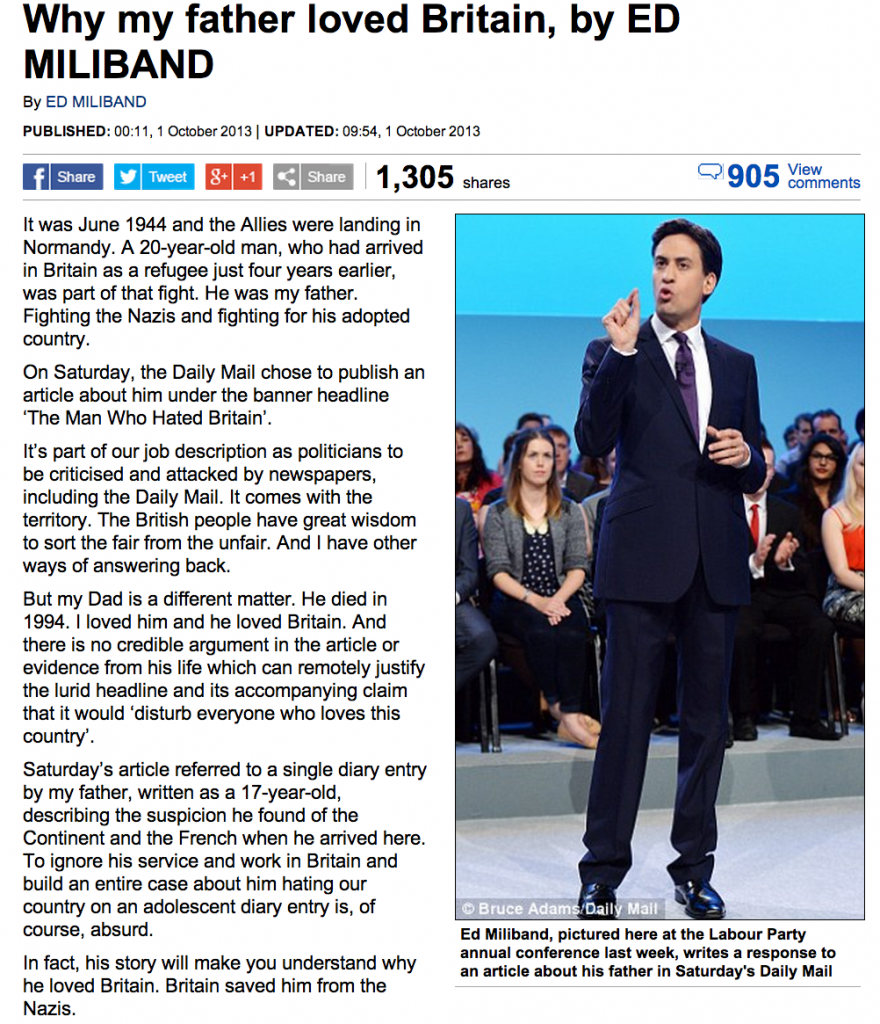 The Daily Mail has been perfecting the art of bullying for decades and since the development of the Mail Online, the newspaper has become the last word in negative and aggressive reporting. It bullies celebrities and ordinary people alike: it is quite happy creating the politics of envy; women are criticised for being too fat, too thin, too old and for trying to look young; it holds everyone up to high moral standards and then is more than happy to provide prurient image after image to create sensationalism and titilation; it wants to but it quite happy to lech at underage girls justifying its distasteful tastes  by claiming the girls are ‘flaunting’ themselves.

It’s difficult to identify what the Mail ‘likes’ or ‘believes in’ as it’s pages are filled with finger pointing, naming and shaming, criticism and hate. Of course Paul Dacre’s paper will tell us they are only providing what the audience wants and the fact that it receives 45 million unique users per month certainly supports this claim – even though the comments on-line seem to indicate that a lot of those hits are from people highly critical of the Mail’s position on a lot of issues. Given the patrician tone taken by the Mail’s writers, perhaps they might want to consider providing what is needed to allow the press to be part of a fully functioning democracy rather than just ‘what we want’. Sadly, this is not at all likely as ‘what the audience wants’ provides the on-line paper its income.

The Daily Mail’s attack on Miliband showed the paper in classic bullying form. The attack was aimed at Ed but, showing extraordinary cowardice, the paper focused its criticism on Ed’s dead father. Bullies will look for victims least likely to be able to defend themselves and the weapons used (Miliband Snr’s status as an immigrant and his alleged lack of patriotism) tap into a range of other problematic areas related to modern politics and underscore the Daily Mail’s prejudices. The paper is clearly confused as it doesn’t know the difference between patriotism and nationalism – Miliband Snr fought against nationalism in defence of his newly adopted country and it is nationalism that the Daily Mail promotes on a daily basis – not patriotism. The paper is not quite brave enough to admit this so it creates all sorts of outraged bluster and claims it’s all in the name of loving one’s country. Nonsense. Bullies believe everyone else is as stupid as the bully is. Mis-defining patriotism, ranting about the danger posed by Marxists and then listing Soviet atrocities demonstrates a complete lack of political engagement and absolutely no understanding of the difference between a political and economic philosophy and a totalitarian regime. The fact that the Soviets were our allies in World War Two has been forgotten by the Mail is seems – but perhaps the Soviet position as an enemy is more ingrained than just a long held cold-war grudge. Perhaps the paper feels the Soviet threat more keenly than most because of its previous ties with enemies of the Soviets in the person of Mussolini and Hitler. Famously the Daily Mail supported these fascists and our own homegrown ones in the 1930s.

The Mail seems to assume that its audience won’t be appalled at the weakness of this argument – an attempt to smear the name of a dead man to disrupt the career of a party leader. The Mail seems to think that it’s audience are so stupid they won’t see through its poltcal agenda in the misuse of the paper’s freedom of speech used to accuse someone of a thought crime. Apparently its audience are so dim they won’t see the hypocrisy of this invective coming from a paper who damned those who spoke out against Thatcher at the time of her death. Apparently we are such dullards we’ll be taken in by the paper alluding to the fact that Miliband Snr is buried in close proximity to Karl Marx in some way means something and proves the Mail is right. This really does feel like a schoolyard argument. Perhaps they should read their own readers’ comments because many readers are not as stupid as the Daily Mail assumes and feel the paper has gone too far. Twitter responded with mockery and satire, the rest of the press and the political class spoke out against the Mail’s article and at the time of writing it is still affording Miliband Jnr the most positive coverage since taking office as the Leader of the Opposition. This has been a massive mis-step for the Daily Mail, but like the ignorant hate-filled bully the paper has become, it cannot back down and admit it made an error of judgement. 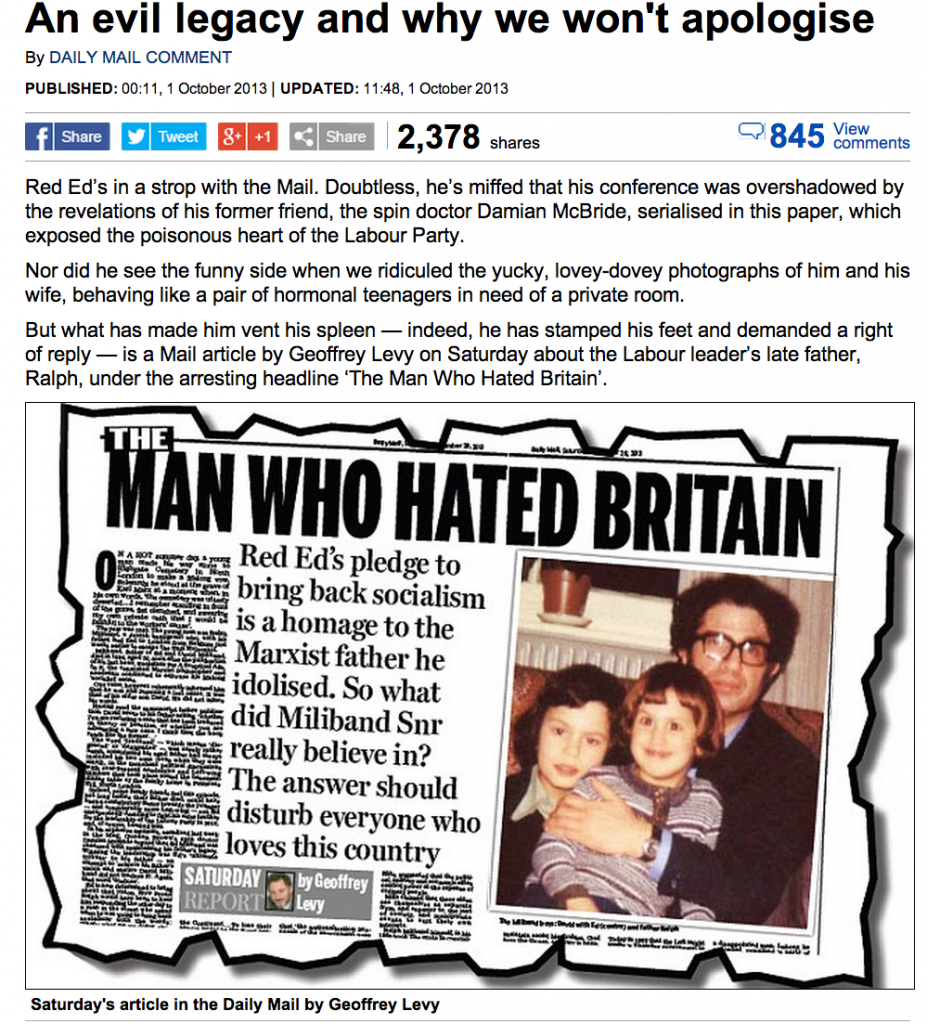 The establishment is taking this opportunity to join in with what Greenslade in the Guardian is calling an ‘open season’ on the Daily Mail. Not only is it now being called out on its history and it’s negative impact on culture but now it’s financial arrangements are  being called into question (the paper is owned by a non-dom peer and the company is incorporated and controlled in tax-friendly offshore locations). It’s offices are to be the focus of a public protest today (Oct 6th 2013). Despite this focus on the paper’s values and actions, no recent critique has yet been as eloquent and (given the Miley Cyrus/Rhianna debates) as pertinent as the one recorded by Amanda Palmer last summer. This is definitely not suitable for viewing at work but definitely worth a watch. 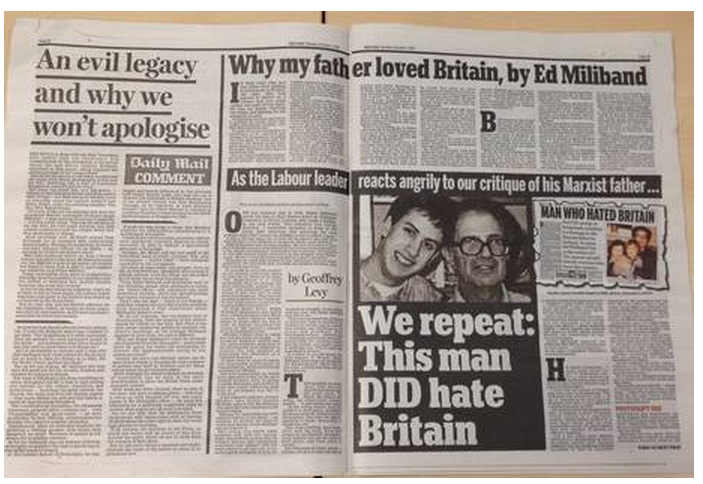 Miliband Jnr has form in standing up against the press. He supported Leveson’s recommendation that there should be state mandated controls on some of the worst and excessive tabloid behaviours. Clearly this and Miliband’s socialist-lite politics make him an enemy in Dacre’s eyes. This character assassination of an active politician’s father is nothing more than a heavy handed attempt to undermine someone who would seek to hold the press responsible for their actions and whose politics stems from an ideal of social justice. the Daily Mail is never interested in what’s best for Britain or the British. The Daily Mail is only interested in the ease of which it can generate profits.

One thought on “Care! Some of the links below connect to the Mail Online”