The nation has spoken (well 66% of them) and a new Conservative government is being formed. 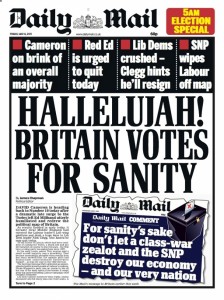 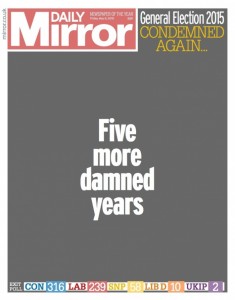 As Murdoch (and Viscount Rothemere, The Barclay Brothers and Levedev) ‘called it’, questions are already being asked as to whether or not the press’s political allegiances have an undue influence on voters. It is too easy to assume that audiences are so unthinking that they would ‘do as they are told’ by a daily newspaper but the newspapers haven’t suddenly declared a political position as the election came close, they have reported on events, policies, politicians and personalities in ways that have shaped the political narratives for the past five years. Although the messages across the media are subtly different, the vast majority of newspapers and news outlets support neoliberalism and the right-wing UK parties. Despite the drop in sales of traditional newspapers, the mainstream press can still set the agenda for online news reporting, for TV news and for social media discussion. They may not have the same amount of influence as they used to, but the UK newspapers create narratives, repeat these narratives over time and in so doing set the framework for debate.

Social media does provide an alternative source for voices and opinions but there is no clear political narrative across social media, people of similar values tend to ‘find each other’ and so confirmation bias can set in. It is easy for audiences to think that their thoughts and their communities are representative of other people’s too. Gathering in like-minded communities can hide the fact that other communities are thinking and feeling differently. Social media allows communities to gather around all points of the political spectrum and so movements forward by one group can be matched (or surpassed) but movements forward by counter-groups. The idea that the power of social media can act to drown out the voice of the mainstream press can’t yet be fully supported. The narrow communities and the multiple voices of social media does not get the control the message for the mainstream in the way the press can. Amplification may make it appear as if ‘everyone’ thinks in a certain way. Loud voices may make messages appear more dominant than they really are. This video by John Harris (whose series Anywhere but Westminster is essential viewing) shows two things that have been reinforced by the election result: Labour were unwilling to connect with voters and the ‘fear of the SNP’ tactic was immensely effective. The demonising of the idea of Scottish power was a strategy employed by the Conservative party that was taken up and repeated by the vast majority of the mainstream press.

This of course is not new. Newspapers, like any business, have always had their values shaped by their own financial interests. When it suited The Sun to do so, they were happy to back Blair’s New Labour despite having supported the Conservatives in the 80s and early 90s and currently being staunchly Conservative again (apart from in Scotland). News UK’s interests are currently best served by a Conservative government. There is no darkened room where plots and conspiracies are put together but institutions are unlikely to speak out against things that would threaten their shareholders’ profits. With no shareholders to please and a requirement to be ‘balanced’ the BBC should be the best place to go to for honest, un-spun reporting but the fact that the government (whoever is in power) holds the BBC’s future and funding in its hands means they are never going to be a voice for anything other than the establishment position. Socially the BBC is ‘left-wing’ (with liberal values of tolerance and inclusion written into its charter) but economically and politically it is neoliberal. When seeking an opposition voice to give balance to governmental policies on immigration or Europe it turned to UKIP. When looking for an opposition voice to scientific concerns about global warming, it turned to climate deniers (usually representatives of big business like Nigel Lawson). As modern politics has moved to the right, so too have the ‘oppositional’ voices heard at the BBC.

The General Election that was ‘too close to call’ both was and wasn’t. After the votes were counted The Conservatives had won clear majority of seats. They did so by winning just short of 37% of the votes. Labour won 30% and ‘others’ won 33%.

The % to seats breakdown for the 6 main UK parties was as follows. 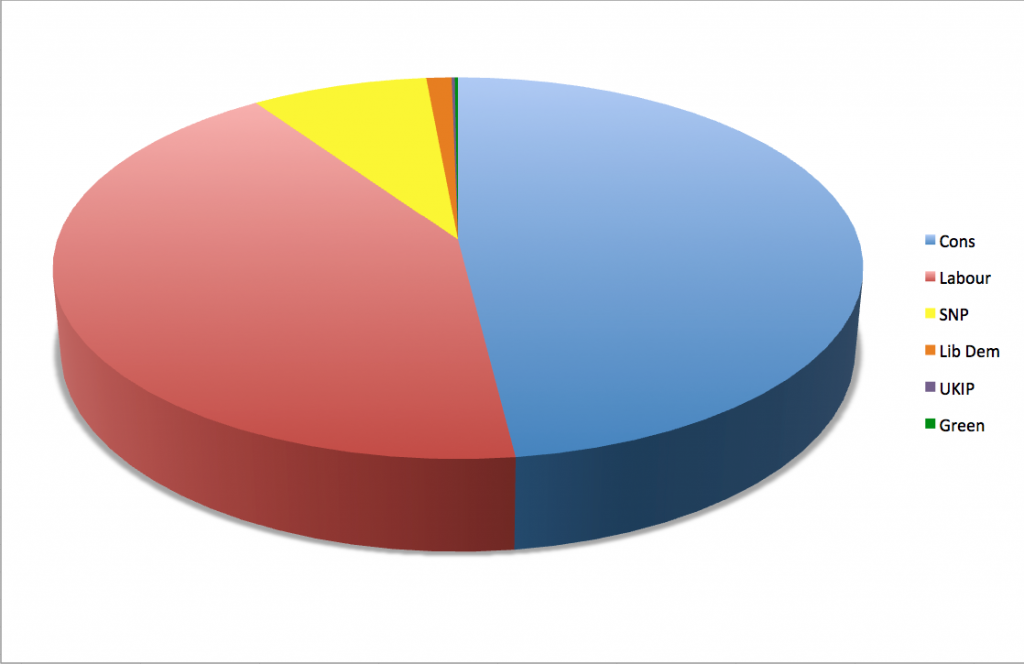 If the seats were split by the % of the vote, the House of Commons would have looked very different. The two main parties and the minor parties’ combined have almost 1/3rd of the total vote each. 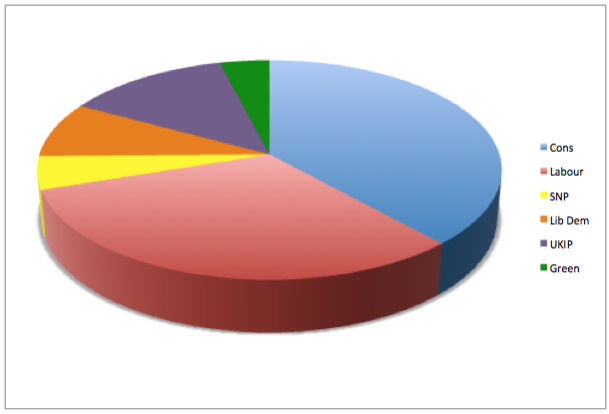 Days after the election, there is a debate is being held about the issues inherent in the amount of people whose views are not represented by the UK’s first past the post system. The BBC reports on the data but most of the active debate is on social media rather than in the mainstream. Those who benefit from the system appear to have no interest in changing the system.