There’s a free supplement to the recent edition of Media Magazine with more sci-fi discussions and debate. 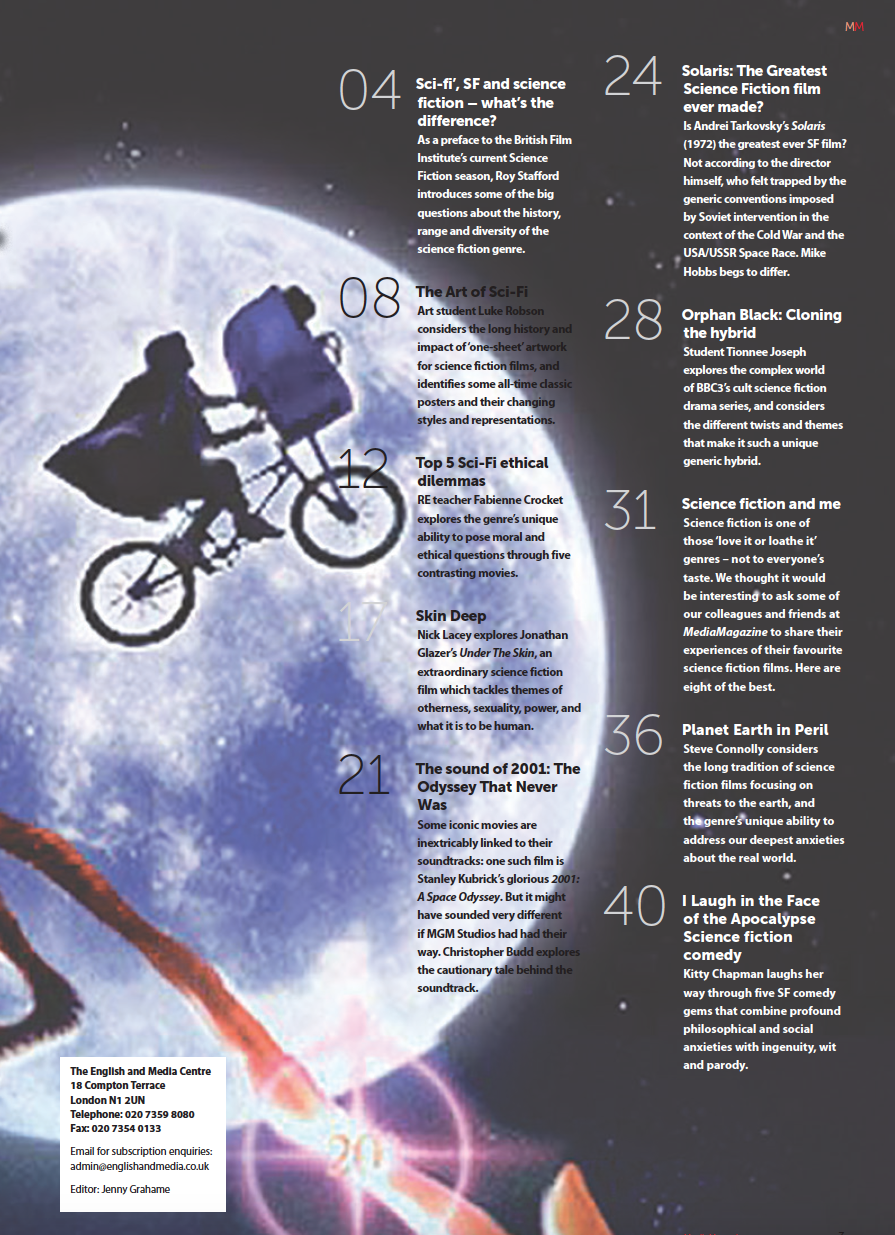 There’s a great new issue of Media Magazine out now! 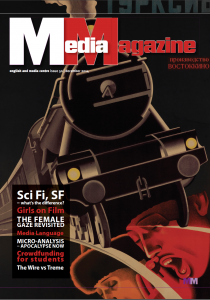 As ever, it provides a fantastically broad range of articles on loads of fascinating media issues and debates. My contribution this issue goes back to basics and considers the importance of analysis – starting with a focus on media language.

There’s a sci-fi season at the BFI and on the BBC at the moment so the cover story is really timely – taking a look at the way genres are defined. There’s more on the genre in a supplement dowloadable from the Media Magazine website. With discussions on texts as diverse as Treme, Judge Judy and The Hunger Games, there’s something for everyone! 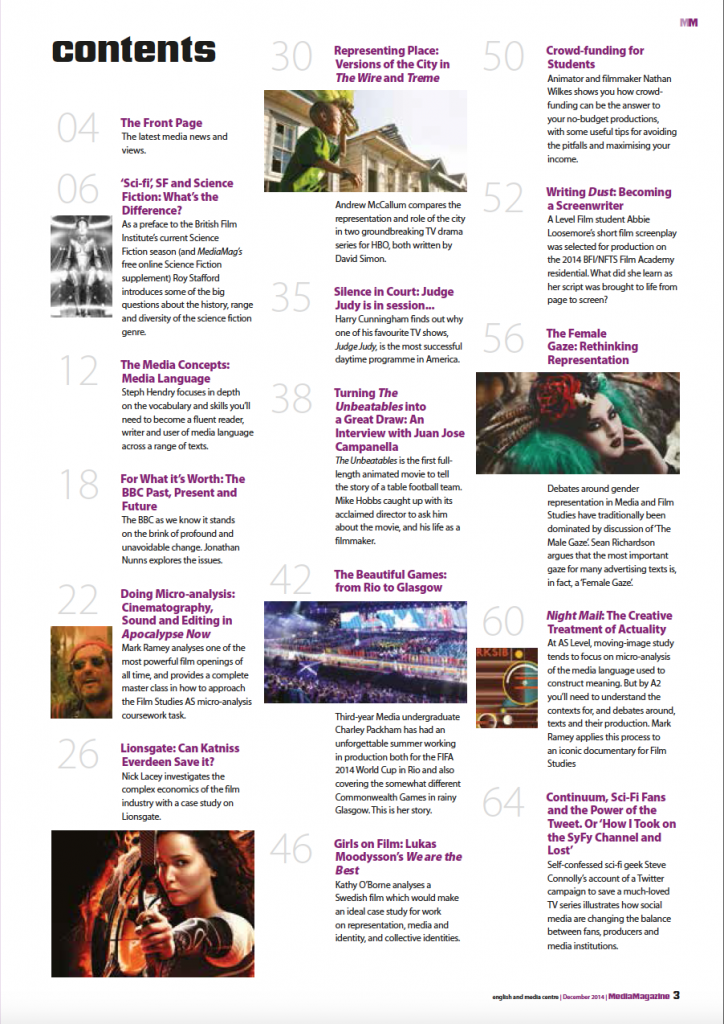 BBC3 are treating us to an insight into the lives of the Fulfords in Life is Toff. The Fulfords are an old land owning family consisting of (on screen at least) Dad (Francis Fulford), eldest son and heir (Arthur), his twin sister Matilda and younger sons Humphrey and Edmund. Foul mouthed, chaotic and argumentative, it is sometimes difficult to spot the difference between their lives and those of the people shown on the benefits culture based programmes of last year. There’s a lot of swearing and name-calling and the younger generation in particular are depicted as work-shy and distinctly stupid in the main. Edmund, the youngest, is shown as being bereft of intelligence, struggling even to spell his own name. At 18 he boasts no qualifications despite receiving the best education money can buy.

As all of the children apart from the heir to the land and house have to try and find a path to their own independence, they come up with hare-brained money making schemes that tend to be unmitigated disasters. Matilda loses interest in her cheese making scheme and the plan to run a murder weekend for paying guests dissolves into total chaos and makes for such cringe-worthy TV that even Francis, who is usually blissfully unaware of how he’s coming across, seemed to know that the whole family were being depicted as complete fools. The murder mystery guests, the fee paying public, however, seemed charmed by the easy charm of the Fulford sons and perhaps being in the presence of landed gentry was as much a motivation for them to attend than the solving of an Agatha Christie style mystery.

BBC 2 offers another look at privilege in Posh People: Inside Tatler an infinitely less sweary look into the lives of the country (and town) set. Based in the offices of the upper classes’ society magazine, the cameras give an insight into the way the interests and needs of the audience (small but the wealthiest demographic of any magazine according to the editor Kate Reardon. Tatler is staffed largely by alumni from schools like Stowe and Cheltenham Ladies College including daughters and wives of the aristocracy with surnames like Money-Coutts (!!). The males in the mix tend to be in charge or out and about taking photographs or trying to gatecrash exclusive social events. There is a distinct deference to the idea of both old and new money as this is a world where two things smooth the way for the people in it – breeding and wealth.

In the Tatler world, well-connected young ladies can kick start their careers by getting work on American Vogue before the age of 21. Failing entrance exams for the military didn’t stop Francis Fulford finding work in the city before taking on the responsibility of his country estate. His youngest son may not be the sharpest tool in the box but for all the concern about their future he and his brother and sister are unlikely to find themselves working in the service industry or struggling to pay their bills juggling money whilst on a zero hour contract.

Ellen Jones in The Independent argues that Life is Toff is ‘a useful corrective to the programmes like Benefits Street, by demonstrating that posh people can be just as ignorant, lazy and badly behaved as anyone else – and with far less excuse.’

This may be partially true but the programmes also show the human face of wealth and privilege. Of course aristocratic young people can’t be held responsible for the random chance that has put them in this socially elevated position any more than a young person can be held responsible for having an impoverished background. Sadly though, the mainstream media does blame the poor for their poverty and panders to the idea that the privileged are in some way ‘better’ than everyone else. In the real world, young people from poor or even ‘ordinary’ backgrounds cannot compete with those who can use old boy networks or access to internships to get them on their feet. Tatler features editor Matthew Bell identifies the power of The Bullingdon Club but the fact that the copyright owners of the image of Cameron and Osbourne posing with their Bullingdon mates will no longer give permission for it to be published is glossed over and he pitches an idea for an article based on ‘how the middle classes have ruined everything’ which simply reinforces that social class still creates an entitlement to opportunity and power. Nigerian billionaire Kola Karim (photographed for a Tatler feature) believes that ‘the old world will always be part of the world order… and that will never change’ and so has worked hard to use his wealth to join the ‘old world’. Both Life is Toff and Posh People act to hide the impact that this idea of privilege and ‘the old world’ has on ordinary people from the way it makes meritocracy and democracy ideals that cannot be achieved. Life is Toff implies that landed gentry are ‘just like us’ whilst Posh People normalises the idea that the wealthy are more entitled to luxury and power than the rest of us. In an era characterised by austerity, low pay and reduced social mobility for the vast majority, seeing a fetishised view of the wealthy and well connected, like Downton Abbey and Made in Chelsea, creates the fiction that this is how the ‘other half’ live when 80% of the UK population earn less than £40,000 a year and where five families at the upper end of the wealth scale are worth more than the lower 20% of the population.